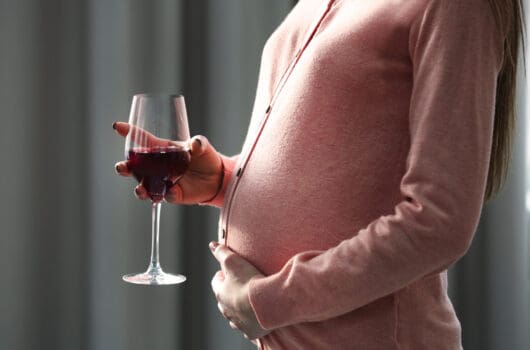 When you’re pregnant, it’s amazing just how much your body is managing to achieve. It is creating brand new organs, doubling its supply of blood and growing life more quickly that you’re able to grow your own fingernails.

It isn’t too surprising that all of this work is pretty exhausting. Being pregnant also comes along with hormonal upheavals and a raft of unpleasant side effects which can make it difficult to maintain the glowing bliss that is so often associated with this time of a woman’s life.

With all of this in mind, it’s easy to see why pregnant women are so keen to relax, de-stress and put their feet up from time and time. This often raises the question: “can pregnant women drink wine?” After all, unwinding in the evening with a nice glass of red is something that a lot of us enjoy after a hard day.

At one time, women didn’t bat an eyelid at the odd alcoholic beverage during their pregnancy. However, these days, the prevailing medical advice has completely changed. Now, women are usually advised to avoid consuming any alcohol while they’re expecting, since it could harm their baby.

There has, however, been some conflicting advice in recent times and that has led some expectant moms to question whether they really need to stay off the Chardonnay. Here, we take a closer look at the guidelines and weed out the fact from the fiction so you can make the right choice for you.

No Amount of Alcohol Is Safe in Pregnancy

Even though some people believe that the odd glass of wine won’t cause any harm to a pregnant woman or her growing baby, the official advice from the American College of Obstetricians and Gynecologists is that there is no safe amount of alcohol that pregnant women can consume.

Although wine sounds far more sophisticated and elegant than a tequila shot or bottle of beer, it’s true to say that the same chemical that could harm your child is found in all types of alcohol. Wine and other types of alcohol give you their all-too-familiar buzz because they contain ethanol or ethyl alcohol, which is a toxin not only for your body but also for your baby.

It’s therefore advised by the US Centers for Disease Control & Prevention that alcohol should be avoided by anyone who is pregnant, trying to become pregnant or who thinks they may be pregnant.

What Are the Harmful Effects of Alcohol on My Baby?

If you drink wine during your pregnancy, alcohol goes into the bloodstream through to your placenta, reaching your baby. In fact, your growing baby could get an even higher concentration of alcohol in their blood than you because their tiny developing body is unable to remove it from its system as quickly as yours can.

Alcohol can also prevent your baby from getting some of the nutrition and oxygen it needs to grow healthily.

Sometimes, and particularly when large amounts of alcohol are consumed by the expectant mother, the alcohol may slow down or harm the growth of the baby’s organs and cause brain damage which is permanent in the developing baby. Fetal health problems associated with alcohol during pregnancy are generally known as FASD or Fetal Alcohol Spectrum Disorder.

A study review even revealed that 1 out of every 13 women consuming alcohol during their pregnancy gave birth to a child who suffered from some form of FASD.

Babies born with FASDs can look healthy, however, they can still experience issues with:

One especially serious form of FASD is fetal alcohol syndrome. It is a medical condition that often causes:

Babies who are born with FAS are often delivered early and are frequently underweight. Often, they fail to grow well, and many have characteristic features of their face as well as physical signs like a short nose, small head and problems in the way the joints or heart are formed.

Infants who have FAS will learn to use language later than other children and once they’ve reached school age, they’ll often struggle to pay attention and have hyperactivity and memory issues, as well as learning disabilities.

Poor coordination is also common among children diagnosed with FAS, as is difficulty in problem-solving. Many also struggle to relate to other children and to make friends, and all of these issues add up to making school very challenging.

Can I Drink Wine While Pregnant?

There are some kinds of issues during birth and pregnancy which are associated with alcohol, however, they may not always be strictly classified as being related to alcohol including:

Will Drinking Wine During Pregnancy Affect My Child as They Get Older?

If you drink wine when you’re pregnant, you could be causing issues that may start when your child is older. For example, these can include social issues and at-risk behaviors. It has been suggested that people in psychiatric care and in prison are 30.3 times more likely to have FASDs.

If you consume wine when you’re pregnant, your child may be at a high risk of:

Of course, these issues may not necessarily occur. However, the risks are increased, and since every parent wants the best for their baby it’s wise to avoid alcohol of all types, including wine, during pregnancy.

Can I Drink Small Amounts of Wine While Pregnant?

There has been some controversial new research stating that light drinking during pregnancy is safe, which seems to contradict the medical profession’s warning not to drink any alcoholic beverages at all while expecting.

Women were first warned about the possibility of alcohol consumption during pregnancy causing fetal alcohol syndrome in 1981, but the terms of the warning referred to “heavy drinking” without any type of clarification about what this entailed.

Midwives have even been known to recommend that pregnant women have some red wine occasionally to relieve stress. Rumors have also continued to persist that small amounts of red wine may even help fetal circulation.

Yet, the original warning from 1981 did mention certain risks such as low infant birth weight and miscarriage were increased even for women drinking just one ounce of alcohol each day. There has also been no research carried out since then to contradict this conclusively. Nevertheless, many people claim light drinking during pregnancy is fine.

One study from Britain in 2013 is often quoted in this context. This research examined almost 7000 ten-year-olds whose mothers had self-reported consuming various amounts of alcohol during pregnancy. It revealed that moderate or light drinking had zero negative effects on the children’s balance, and interestingly, higher levels of alcohol consumption were even linked with improved balance.

Why You Shouldn’t Drink Any Wine While Pregnant

Some problems exist with that study, though. Firstly, other factors such as socioeconomic conditions came into play. Secondly, the study was only examining balance and none of the other common symptoms of FASD.

The interesting thing, though, is that the study appears to contradict those carried out earlier to suggest poor balance was associated with alcohol consumption in pregnancy. So, should the earlier studies be overlooked? Researchers simply aren’t certain.

A study carried out more recently into behavior problems in childhood showed that a link was found between early onset behavioral problems and drinking alcohol moderately (up to 6 servings each week with no binge drinking).

A different piece of research, meanwhile, found consuming alcohol in small amounts before reaching the 15th week of pregnancy was linked to no problems with baby development or the birth itself.

Conversely, though, alcohol is linked with different issues at different times during pregnancy. For example, it has been discovered that the chances of miscarriage are raised if you consume alcohol during the first ten weeks of your pregnancy. Although, some studies have suggested drinking small amounts of alcohol during the second or third trimester has no negative impact on learning outcomes or mental health. Nevertheless, though, it’s known that the baby’s brain continues to develop and grow during pregnancy’s third trimester, so it’s possible that alcohol could affect your little one’s brain if you consume it at any stage of your pregnancy.

With all of this taken into account, it isn’t too surprising that many women are confused about whether or not it’s safe to drink wine when they’re expecting. The research available today is very mixed, with medical experts failing to come to an agreement about whether alcohol can be consumed during pregnancy safely at all, and, if some, how much. The term “light drinking” means something different to everyone and studies are often vague, failing to indicate clearly the way in which the alcohol was measured.

It’s also possible that there are genetic components at play that are not yet known or understood when it comes to consumption of alcohol in pregnancy. We now know, as an example, that some people have a genetic predisposition to developing some kinds of breast cancers. It may be possible that the same holds true for FASD. At the moment, medical experts don’t know.

A lot more research will need to be carried out before it can be guaranteed the amount of any type of alcohol is considered to be safe for a pregnant woman to consume, if indeed any. Meanwhile, it’s wise to adhere to current guidelines and avoid wine and other types of alcohol completely until after your baby is delivered to be safe.

Can I Drink Wine While Breastfeeding?

If you drink wine when you’re breastfeeding a baby, this can also cause problems. Links have been found between consuming alcohol and other issues such as:

It isn’t too difficult to completely avoid wine and other types of alcohol when you’re pregnant, particularly since a lot of women find they dislike its taste early in their pregnancy.

A lot of women give up drinking wine as soon as they’re aware they’ve become pregnant, and many decide to stop drinking alcohol when they’re planning a pregnancy. Some women, though, will only learn they’re pregnant after having consumed alcohol before taking a test. If this happens, they shouldn’t drink any more alcohol but they also shouldn’t be too worried – the risk of their little one being affected is fairly low.

If you need to relax and unwind after a difficult day and usually turn to the wine bottle, you could try replacing it with grape juice instead which is rich in antioxidants. Or why not try coconut water? Herbal teas and warm baths can also help you relax too, which can be just what you need after a challenging day.

Going out with friends or to dinner parties can be problematic when you’re trying to avoid wine during pregnancy, especially in the early stages when you may want to keep it a secret. Luckily, there are quite a few non-alcoholic wine products that are on the market today which will give you the same flavor that you love without any of the potentially harmful alcohol and which will look enough like the real thing not to raise others’ curiosity. Alternatively, you could always say you’re the designated driver and so can only have soft drinks!

Remember, in the scheme of things, nine months isn’t such a long time and you’ll soon be raising a glass to the health of your newborn!