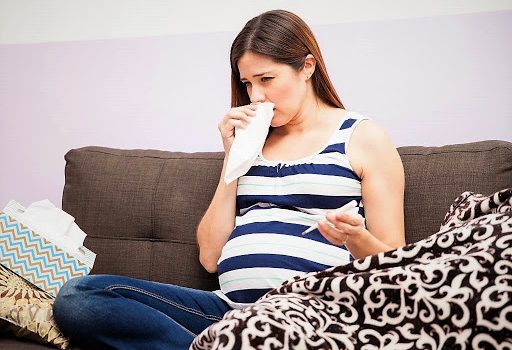 If you’re pregnant, there’s a good chance that at some point you’ll catch a cold during those nine months. This is because your immune system will be affected by your pregnancy. Seasonal colds are common respiratory complaints in humans. There are millions of cases of the common cold each year in the USA. However, knowing what you should do if you’re suffering from a cold during pregnancy is important to keep both you and your baby healthy. You should consider several factors when preventing colds or treating them during pregnancy, and sometimes, you may even need to seek help from your doctor. So, read on to learn more about how to avoid this all-too-common problem and how to resolve it should you start showing symptoms.

Are My Cold Symptoms Due to My Pregnancy?

Surprisingly often, pregnant women experience symptoms that are similar to those produced by the common cold. For example, many pregnant women suffer from a blocked nose when they’re pregnant due to the impact of changing hormones on their nasal passages. The result can be a pressure headache that feels similar to the early signs of a cold. However, if there are no other symptoms, it’s probable that you don’t have a cold at all.

The symptoms usually produced by colds include:

Usually, symptoms like these aren’t caused by hormonal changes, so if you’re experiencing any of the above, you probably have a common cold.

How Can Colds During Pregnancy Be Treated?

It’s pretty common to catch colds during pregnancy, so you should know which medications you can take safely at this time. Usually, treating colds means buying medications over-the-counter. Yet, if you’re pregnant, you need to bear a few things in mind when it comes to your own safety and that of your unborn baby. Medications are often a sensitive subject. Lots of pregnant women worry that medications, even those available over-the-counter, could negatively affect their baby. Most over-the-counter medicines use similar ingredients to treat the symptoms of a cold. Here, we take a look at which medications are considered to be safe to use when you’re pregnant and which you should avoid without consulting your doctor.

Can I Take Pain Relievers for Colds During Pregnancy?

If you’re experiencing any pain during your pregnancy, you should treat it since it can cause hypertension, stress, and even symptoms of depression if allowed to go unchecked. Medications that are available over-the-counter include ibuprofen and other NSAIDs (non-steroidal anti-inflammatory drugs) and Acetaminophen. The FDA recommends that using pain relievers in pregnancy should only be done with a healthcare provider or doctor’s direct guidance.

There are a few possible risks associated with using pain-relieving medication in pregnancy. There have been studies carried out into the use of different medications by pregnant women, and these have possibly pointed to a few serious problems. These include:

It’s important to note that the FDA has said that there were limitations in the way these studies were carried out, and therefore, there may not be any serious cause for concern. For example, another study showed that it was safe to take Acetaminophen in pregnancy. With so much disagreement and confusion amongst the medical profession about this subject, this is why you should consult your doctor or healthcare professional before taking any type of pain relief in pregnancy.

Can I Take Cough Suppressants in Pregnancy?

Medications to suppress a cough like dextromethorphan can often be found in medications available over-the-counter. Usually, these medications are believed to be safe for women during pregnancy when taken correctly. However, you should always try drug-free cough relief options first before opting for medicines. For example, mentholated or herbal throat lozenges are a good choice to ease sore throats and coughs in pregnancy.

Can I Take Antihistamines for a Cold During Pregnancy?

A review in the Journal of Pharmacology and Pharmacotherapeutics showed that no antihistamine drugs that are available at the moment are classified as safe in pregnancy. Chlorpheniramine and cyproheptadine are two antihistamine drugs which have been linked to temporary symptoms in pregnant women, but they haven’t been associated with any infant birth defects. However, this doesn’t mean they’re entirely safe for use, so it’s probably wise to avoid using antihistamines without consulting your doctor first.

Are Decongestants Safe for Use in Colds During Pregnancy?

Are There Any Natural Remedies for Colds During Pregnancy?

Lots of doctors suggest that pregnant women try non-medicinal alternatives to treat their cold symptoms before turning to over-the-counter drugs. You should try increasing your liquid intake each day to 8-10 glasses to flush out your body and make you more comfortable. Smoothies and juice are also helpful in providing extra nutrition if you lack any appetite.

You should also try to rest more while suffering from a cold during pregnancy. This helps your body to recover. If you lie down with your head elevated, this can help to relieve stuffiness and improve your breathing.

Lots of pregnant women use a room humidifier to clear their blocked nose and to promote productive coughs. You could also try applying warm compresses to your shoulders, sinuses, and head to reduce congestion and pain.

Saline nose sprays, rinses or drops can moisten the nasal passages and are safe for use in pregnancy since they’re non-medicated. Gargling with salt water may ease a sore throat, control your cough and wash away your post-nasal drip. Meanwhile, taking a couple of teaspoons of honey or mixing them into some hot water with a squeeze of lemon will suppress dry coughs just as well as any over-the-counter cough syrup.

Can Colds During Pregnancy Be Prevented?

Although there’s no way to guarantee for certain that you won’t get a cold during your pregnancy, there are a few things you can try to boost your immune system and prevent colds from developing. Eating well is the first thing you should implement to keep your immunity levels high. Making sure you get plenty of vitamins and minerals into your diet will give you the best chance of fighting off any bugs that come your way. Fresh foods will ensure your body gets all the nutrients that it needs. You should also try to find a prenatal vitamin supplement that includes vitamin C and zinc that support your immune system and prevent colds.

You should also try to take exercise and stay active as much as possible. Taking light or moderate exercise that is pregnancy-safe such as indoor cycling or swimming will increase your metabolism and boost your immune system.

Washing your hands regularly is also an effective way to guard against viruses like the common cold. Using simple warm water and soap to wash your hands after coming into contact with public items such as door handles, shopping carts, and other people can help you to stay illness-free.

What Are the Considerations and Risks of Colds During Pregnancy?

Colds during pregnancy are just the same as colds at any other time of your life, but there are a few extra things you need to take into account when you’re pregnant. For a start, you need to ensure that you really are suffering from a cold and not the flu. Both have similar symptoms. However, flu is usually much more severe. It will also be accompanied in most cases by fever. If you’re experiencing a fever and suspect that you may have flu, you should contact your healthcare professional or doctor immediately. They will give you advice about how to reduce your fever to a safe level quickly and effectively.

Will Colds During Pregnancy Affect My Baby?

Many pregnant women worry that if they suffer from a cold during their pregnancy, their baby will be affected. Usually, there’s no need to worry about this. A cold is a mild illness and it can be handled relatively easily by your immune system. Usually, the symptoms will be temporary, and your cold will generally have gone away within two weeks.

If you are suffering from an infection or very high temperature, though, your baby can be affected. If you’re experiencing any symptoms of infection or a fever, you should consult your doctor straight away. If you’re experiencing a fever over 100.4 degrees Fahrenheit, have been coughing up green or yellow mucus, or have had symptoms for more than two weeks, call your healthcare provider now so you can take steps to reduce those symptoms and keep your baby safe.