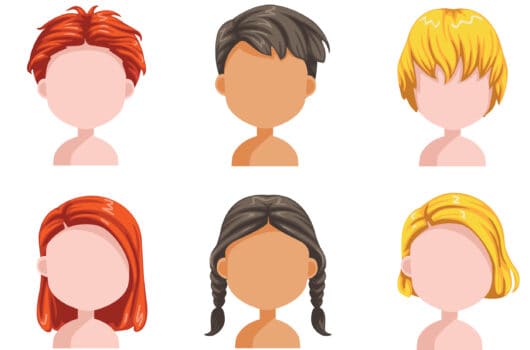 Working out the hair color of your baby is easy.

You just look at their head.

Problem solved. Article over. Thank you.

But in all seriousness, there are some genetic things you need to take into consideration to get an idea of the probabilities of your unborn baby’s hair color. It’s not always an exact science, but you can take a good guess of what your baby’s hair color might be.

With this child’s traits calculator, you can input biological traits of these six people to calculate the biological traits which your baby will have. You can estimate its predicted hair color, eye color and type of ear lobes. The calculator also works out the likelihood of your kid having dimples, a cleft chin and a widow’s peak.

When Is Hair Color Determined?

From the very moment a sperm and egg meet, every one of a child’s biological traits is determined. From that very moment, a child’s hair color, eye color and everything else have already been set in stone.

Upon fertilization, the egg and sperm combine to make up 46 chromosomes, which will determine what the child looks like. These chromosomes determine hair color, eye color, sex, personality traits, blood type and much more.

But back to the hair color.

Although we know how hair color is influenced and determined, we still can’t always predict exactly what the hair color of your baby will be. It’s a little more complicated than just 46 chromosomes, since each chromosome contains hundreds or thousands of genes.

That’s a lot of genes, leaving us with almost-endless genetic combinations when you combine the genes of two different people. So, yes, we can make predictions, but few of them are absolute.

For example, if two people have a kid, that kid might not have the same eye color or hair color as their parents. Similarly, no two siblings ever look exactly the same, so there’s obviously lots of wriggle room inside the whole equation.

Alleles that lead to darker eyes and hair, for example, are usually dominant, which is why there are more dark-haired, dark-eyed people in the world, compared to how many light-eyed, light-haired people there are.

That’s all because some alleles are recessive, and some are dominant.

Let’s take a look at the situation where two brown-haired parents have a blond-haired child. That seems unlikely, and it is mathematically unlikely. But if both parents have the recessive  blond trait, and their baby receives both these alleles in their genetic makeup, the baby will have blond hair even though neither of their parents do. Weird, right?

The further back you go in the genetic chain, the easier it becomes to make a good prediction, as it becomes easier to calculate which recessive genes may or may not be present. But you won’t find a calculator that goes back fifty generations, because no-one has time for that.

Pigment and the Hair Color of Your Baby

Can the Color of My Baby’s Hair Change?

Often, kids experience a surge in eumelanin as they grow older, resulting in darkening of the hair. This can happen in infanthood, childhood and even early adolescence.

Hair is very changeable. Most babies are born bald, but that doesn’t mean they’ll stay that way. Likewise, a baby that comes out looking like they’ve got a wig on won’t necessarily stay that way either.

What Are the Chances That My Baby Will Have Red Hair? 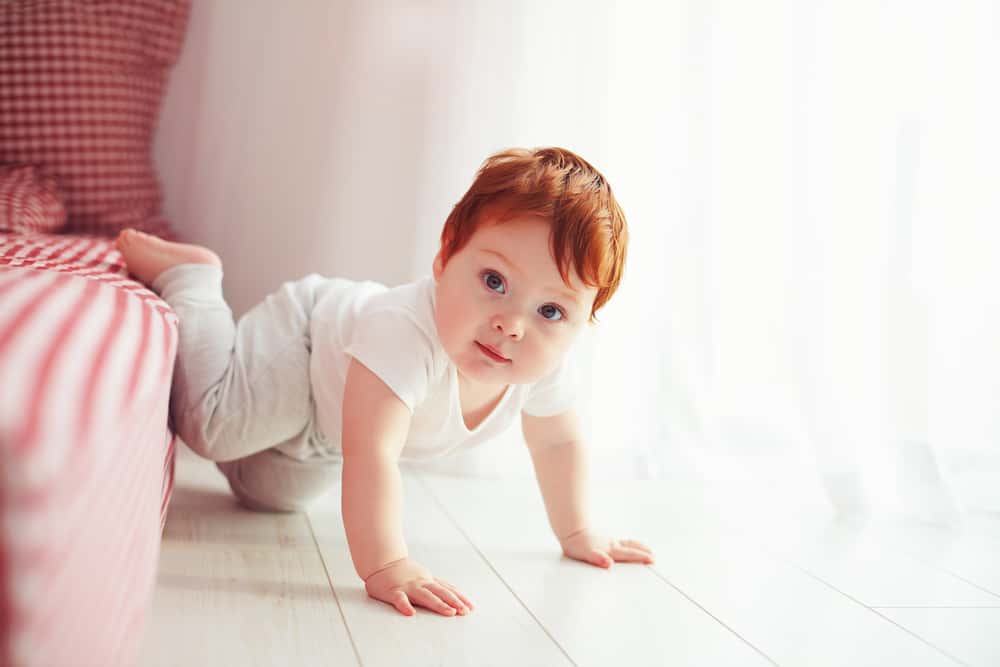 Generally speaking, the chances are pretty low. Depending on who you ask, somewhere between 1% and 2% of the world’s population have red hair. But it’s obviously more likely in some places than others.

Like the blond hair gene, the red hair gene is recessive, so both parents must have that gene in order for it to be passed on. If both parents are redheads themselves, they’ll absolutely have a redhead baby. That’s because they only have redhead genes, so they can only pass those genes on.

But again, it’s possible for two non-redhead parents to have a redhead baby. But for that to happen, they’ll both need to carry a recessive redhead gene, so it’s pretty unlikely that such a thing would happen.

What Are the Chances That My Baby Will Have Black Hair? 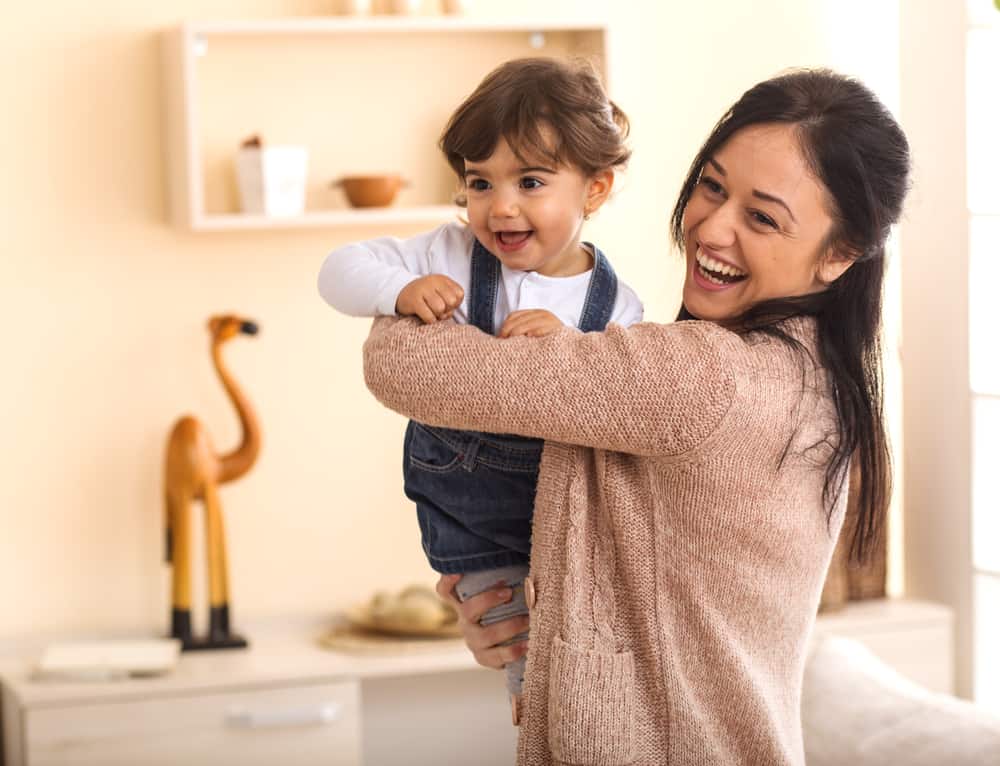 Relatively, the chances are pretty high, as black hair is the world’s most common hair color. Again, it’s more likely in some regions than others, but around 75% of the world’s inhabitants have black (or very dark brown) hair.

If both parents have black hair, or dark hair, there’s a good chance that their baby will have black hair or dark hair. But it’s possible that both parents still possess the recessive blond allele, or the recessive redhead allele. If they do, and they both pass that allele on to their unborn child, that unborn child will have blond hair or red hair, no matter how unlikely that might seem.

How Likely Is Albinism in Babies?

It’s actually a little more common than you probably think. Up to 1 in 100 of the general population might be carriers of the albino gene. But again, that doesn’t always mean they’ll pass it on, just as a person with the blond hair gene might not pass on blond hair.

Around 1 in 19,000 US kids have albinism, but rates are much higher in other parts of the world.

The chances of albinism hugely vary according to where you’re from and where you live. It’s most common in Sub-Saharan Africa, and in people who have heritage from that area. In parts of the world where albinism is common, there’s thought to be around a 1 in 3,000 chance that a kid will be born with it.

Remember that melanin stuff we were talking about before? A person with albinism has a lack of it, and therefore has very pale skin and hair. And as you’ve probably guessed, if your child has albinism, none of the other genetics matter when it comes to hair color, because they’ll definitely have white hair.

Again, albinism is rare, and is a recessive gene – so both parents need to carry the gene in order for a child to be born with albinism.

Can I Figure Out the Hair Color of My Baby?

It’s (usually) not an exact science, but you can make some good estimations.

If (like we keep saying!) you use an online hair color calculator, you can make a good guess, leaving you with a decent idea of the color of the hair that’ll be spurting out of your baby’s skull. But in most cases, you’ll never know for sure – and the color of their hair might even change as your kid grows.

For more information on these genetic predictions and likelihoods (and for the visual learners among you), this video is great.