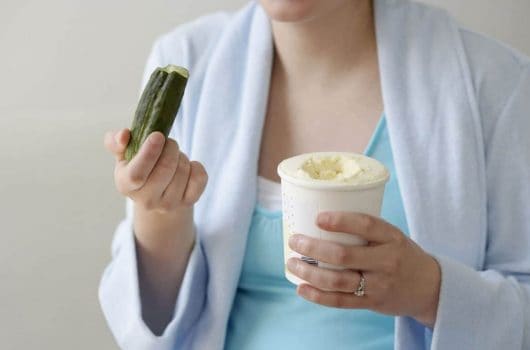 If you’ve ever watched a movie or TV show featuring a pregnant woman, you can be sure that at some point someone will have mentioned pregnancy cravings. Everyone knows the joke about eating pickles with ice cream, and many women who have had a baby will be more than happy to share her own experiences of fixations with eclectic food combinations! While eating steak with brownie mix on top might seem repellent to most of us, to some pregnant women it can seem like a dream meal. Why? The answer is simple – pregnancy cravings.

The big question, though, is what lies behind these food fantasies? Are they ever harmful? Doctors say that the answer depends on what types of food you’re craving. Here, we take a closer look at why this phenomenon occurs and whether you should be worried.

What Does Your Body Need?

Nobody really knows why women get pregnancy cravings, but there are some theories that suggest that they could be due to the mother lacking certain nutrients. Some experts believe that cravings are the body asking for something it needs. For example, the classic pickles craving could be down to a need for sodium, while a desire for chocolate ice cream could all be down to the body needing more fat or calcium. The body may not need the particular food that is being craved, but rather something found in the food.

Experts think taste buds could have a key role to play in how a pregnant woman interprets her body’s needs. During pregnancy, hormone levels increase dramatically and this alters her sense of smell and taste. This means certain odors and flavors become more offensive or appealing. This can result in food aversions during pregnancy that can trigger morning sickness, vomiting and nausea.

When Will Pregnancy Cravings Begin?

Not every woman will experience pregnancy cravings. Those who do will usually begin to experience them during the first three months of pregnancy (also known as the first trimester). The cravings then usually peak in the second trimester before subsiding during the third. In a few cases, cravings may continue after the baby is born, but this is rare. In fact, many women crave a certain food for a few days or weeks before the craving changes to something else.

What About Food Aversions?

A food aversion is the opposite of a craving – it is a term used to describe the feeling a woman may develop when she simply cannot stand the idea of consuming a particular type of food or drink. Food aversions tend to begin about the same time as pregnancy cravings.

Experts have suggested that food aversions may be to do with vomiting and nausea caused by morning sickness. For example, many pregnant women find that they develop an aversion to meat during their pregnancy. The smell or sight of raw meat, cooking odors or even the texture of cooked meat can make many pregnant women feel sick. In fact, studies have shown that women who eat more meat during pregnancy are more likely to experience increased levels of morning sickness.

Researchers believe that this could be because meat may contain bacteria that is potentially harmful to the baby and mother, which could make them ill. If the body makes meat an unappealing option, it can induce an aversion that can protect both mom and baby from harm.

Can Pregnancy Cravings Be Dangerous?

Although some pregnancy cravings seem strange, in most cases they aren’t dangerous to either the baby or mother. There are some cases, however, when the mother begins to crave something which isn’t a food item. This is a condition called “pica”. Pica is a term used to describe a case when someone has an overwhelming need to eat something which isn’t edible and which could cause harm to both the baby and mother.

Some women find they crave things such as dirt, crayons or laundry starch when pregnant. Clearly these items are not intended to be consumed, yet the urge to eat them can feel overwhelming. This can lead to some women engaging in dangerous eating behaviors such as consuming non-food substances which could be dangerous to eat.

What Should I Know About Pica?

Pica isn’t well understood by doctors. However, it is thought by some experts that these cravings could represent some form of nutritional deficiency, such as a need for more iron. But, no studies exist to prove this theory.

In some circumstances, it’s possible such cravings could have an ethnic or cultural component which fosters the consumption of dangerous non-food items. Some communities actually encourage fulfilling these types of cravings, whether they are food-related or not. Clearly, this can be problematic.

Why Are Pica Pregnancy Cravings Dangerous?

One of the most dangerous elements of pica pregnancy cravings is when the woman experiences an urge to eat lead in the form of clay or dirt. This could cause the baby to have developmental problems such as impaired hearing, poor motor skills or low verbal IQ scores. When babies are exposed to lead before birth they may also be more at risk of developing ADD or learning disabilities. Eating dirt while pregnant can lead to lead poisoning, which can result in serious neurological damage for the unborn child. Therefore, if any pregnant woman craves non-food items, she should immediately seek medical advice and get tested for nutritional deficiencies for zinc or iron.

What About Other Pregnancy Cravings?

For the majority of pregnant women, cravings will fall into one of a handful of categories: salty, spicy, sour or sweet foods. Only around 10% of women crave healthy vegetables and fruit while pregnant. This is why some doctors have concerns about cravings, even if they are for normal food items.

If a woman fills up on foods that she is craving instead of eating nutritious foods that benefit her and her unborn baby, serious deficiencies can occur in both the mother and baby. This is because the foods craved during pregnancy are often full of empty calories. Cravings can also lead to excessive weight gain, which can result in long term health issues for the mother and child. Many women who become pregnant are already overweight or even obese, which means that it’s especially important to ensure excessive weight gain is avoided during pregnancy.

When pregnant women gain too much weight the risk of developing preeclampsia (a complication during pregnancy that is diagnosed by persistently high blood pressure) is much higher. Weight gain can also cause a greater risk of problems emerging during labor or delivery. Women who have a normal body weight before becoming pregnant should gain only 25 to 35 pounds during those nine months. For overweight women, only 15 to 25 pounds of weight gain should be seen. Doctors therefore believe that handling cravings properly can play a major role in ensuring pregnant women don’t gain a dangerous amount of weight.

How Do I Handle Pregnancy Cravings?

If you crave foods that are high in fat or sugar during pregnancy, it’s likely you’ll see excessive weight gain at an early stage if you give in to those desires. If you are at a greater risk of developing gestational diabetes, giving in to those cravings for sugary foods could be even more dangerous. This is why it’s so vital to handle those cravings properly.

The key lies in knowing what your body really wants when you experience a craving. You can then find a healthier alternative which will satisfy you without causing weight gain or health problems. Rather than simply reaching straight for the food you think you desire, take a few moments to try to understand what your body may need instead.

For example, if you’re craving strawberry ice cream, pause for a moment and break down that craving. Is it the coldness you crave? A creamy, smooth texture? Or is it the sweetness of the strawberries you truly want? Once you know what you really desire you can choose a healthier alternative. A bowl of strawberries, a strawberry yogurt or some sorbet could satisfy a sugar craving in a tasty yet relatively healthy way. On the other hand, if you really need the calcium in the ice cream, you could choose some cheese, yogurt or kefir.

Which Foods Should I Eat When I Have Pregnancy Cravings?

There are many healthy foods you could choose if you’re experiencing some of the most common unhealthy pregnancy cravings.
Try replacing:

These healthier alternatives could help you to satisfy your pregnancy cravings without causing you or your baby harm.