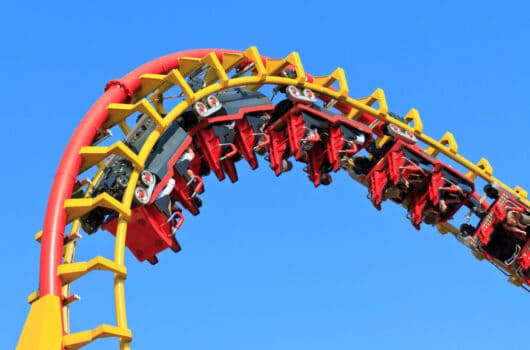 There’s nothing quite like the thrill of a roller coaster ride. The anticipation as you approach the peak, the nerves when the carriage jolts to a sudden halt, and the pure joy as you accelerate down at breakneck speed.

If you’re a true adrenaline junkie (or your friends have invited you to an amusement park trip and you’re struggling with FOMO), you might be wondering if you can continue to ride roller coasters in your pregnancy.

Is this as crazy and dangerous as it sounds? Pretty much. But there are lots of factors to take into consideration, so let’s analyze the evidence, possible complications, and who’s most at risk.

What the Evidence Says

There’s not any hard scientific evidence that women shouldn’t take a roller coaster when they’re pregnant. But does that mean you just go ahead? Probably not — because they haven’t been confirmed as safe, either.

Think about it. For scientific evidence to conclusively prove that roller coasters are dangerous, it would require a good sample size of pregnant women to put their babies in danger and then monitor side effects. That doesn’t exactly sound like a feasible, ethical experiment.

But we can certainly use our common sense here.

Rides in amusement parks often display warning signs saying that pregnant women shouldn’t go on the rides (or that they should only do so at their own risk). Is this done just to cover the backs of the amusement park owners? Most likely — but it’s also an indicator that you should proceed with caution since there’s a reasonable chance something could go wrong.

To see why, let’s look at the potential risks roller coasters pose.

The main problem with roller coasters is how they hurl and spin about the people who ride them, resulting in jolting movements that could cause damage. Fetuses are very sensitive, and such intense movements could result in grave harm.

We only need to look at the case of auto accidents to demonstrate this. High-speed (80km/hr or more) collisions are associated with fetal death and serious complications. However, collisions that take place at a lower speed are far less dangerous.

Although auto accidents and roller coasters aren’t directly comparable, they certainly have some common features — namely, high speeds and sudden movements. This suggests that roller coasters are a terrible idea for pregnant women.

Also, it’s not just about the abrupt movements of the roller coaster. These rides also require the people who ride them to strap themselves in tightly, which can also be harmful for fetuses.

So far, we’ve kept things vague regarding the possible effects on the fetus of riding a roller coaster. You’re probably wondering exactly what could happen.

Here’s an outline of the two most likely complications: placental abruption and miscarriage. 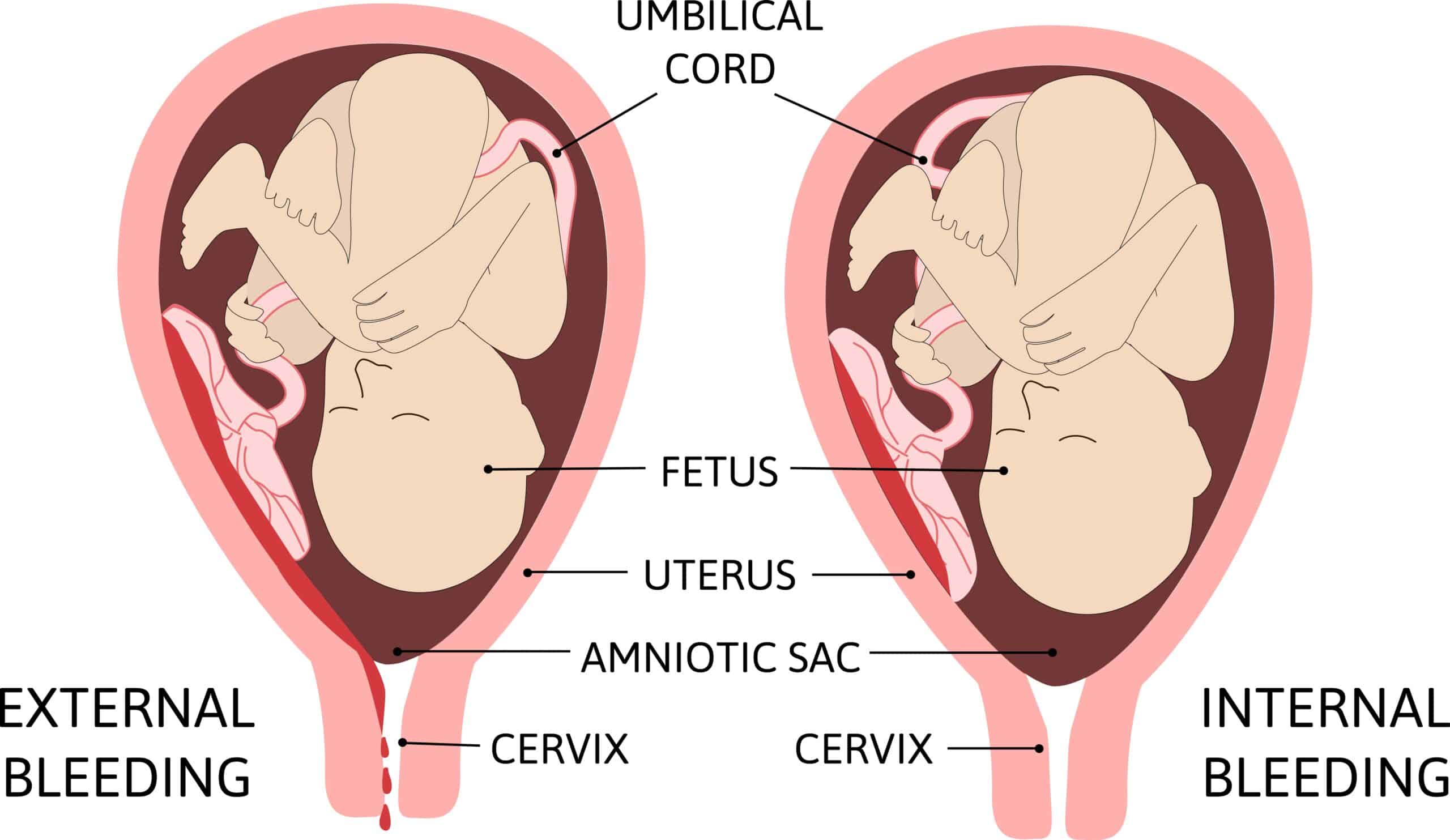 The main concern related to riding a roller coaster while pregnant is the chance of placental abruption. This occurs when the placenta becomes unattached from the uterus wall, either partly or entirely.

Since the attachment is necessary to supply the fetus with oxygen and nutrition, it’s extremely serious if the placenta becomes completely unattached. It can lead to the baby being born prematurely with a low body weight, or sadly, a more fatal outcome.

In cases of partial unattachment, there are fewer complications, but the baby may still be born at a lower body weight as a result.

The exact reasons for placental abruption are unknown, but it seems to be caused by either other conditions (like hypertension) or a sudden jolt or jerk of the body. Accidents and falls can cause these sudden jolts, which injure the abdomen, but roller coasters could have the same effect.

Around 1% of pregnant women experience placental abruption, so although it’s relatively uncommon, lots of people go through this.

Suffering a miscarriage is a true tragedy and the worst fear of many pregnant women. Fortunately, there’s no concrete evidence that roller coasters can cause miscarriages, but I’d still urge you to consider that a link is possible.

Since roller coasters tend to move abruptly and throw the body about, they could cause trauma to the fetus that results in a miscarriage. This is most risky later on in pregnancy.

Given that there’s no definitive information about whether roller coasters cause pregnancy complications, it’s tough to figure out exactly how at risk you are. The most sensible course of action is to avoid roller coasters altogether, even if you think you’re less at risk than others.

However, in case you’re still considering it, here are some factors to consider.

So far, We’ve been referring to roller coasters as if they’re all made equal — but as anyone who has ever visited an amusement park will know, this isn’t true.

Some roller coasters are terrifying contraptions that seemingly move at the speed of light, spinning their passengers around and even turning them upside down. Going on these types of rides during your pregnancy is almost certainly a bad idea.

But then there are the other roller coasters, the ones designed for small children, that are relatively slow and tame. If the ride involves no jolts or abrupt movements, it’s probably a lot safer, but we’d still recommend taking a cautious approach.

Another factor to consider is how far along in your pregnancy you are.

The riskiest point in your pregnancy to take a roller coaster is during the third trimester since this is when jarring movements are most likely to result in serious complications. As we’ve seen already, placental abruption usually happens during the third trimester — this is because the placenta is fully developed and can be disrupted more easily.

However, it’s far from safe to take excessive risks during the first stage of pregnancy.

The first trimester of pregnancy is when the fetus is most vulnerable, so it’s generally wise to be extra cautious. Why? During these initial 12 weeks, the fetus’ major organs and other systems haven’t fully formed, so the fetus is in a very sensitive state.

Another consideration is that, the later on in your pregnancy you are, the less mobile you’ll feel. Those metal barriers aren’t exactly designed for pregnant women and could end up harming your bump.

Basically, if you really have to take a roller coaster ride when pregnant, it’s slightly better to do it during the earlier stages of pregnancy — but whenever you do it, there are serious risks.

Women Who Are More at Risk

Although it’s not advisable for any pregnant women to ride roller coasters, some women are even more at risk than others.

If you’ve previously suffered from a placental abruption, it makes you more at risk to suffer from the same problem again. Also, anybody who has previously experienced complications during pregnancy is more vulnerable to have the same problems during subsequent pregnancies.

Being over the age of 35 makes you more at risk of complications during pregnancy, so it’s recommended to take extra precautions. This is especially true if you’re older than 40, where there is a more pronounced risk of placental abruption. Generally, the younger you are, the less likely certain things are likely to affect you — but that doesn’t make roller coasters safe.

Another risk factor for placental abruption is suffering from certain health issues, like hypertension. Other health problems (e.g., diabetes or thyroid disease) and lifestyle choices (like smoking or drug use) can also cause problems, but they’re not specifically linked to placental abruption.

Finally, anyone who has been involved in other accidents (like a fall or auto accident) during their pregnancy needs to be extra careful, as these events may already have caused some damage to the fetus.

Reading all this might sound alarming, but remember, it’s just about taking precautions to ensure your fetus remains as safe and healthy as possible. With so little information about this specific topic, nothing can be ruled out.

How to Spot Complications

If you’re reading this after taking a roller coaster ride before learning you were pregnant or without considering that it could be harmful, learning about the possible dangers involved might have got you worried.

There’s no need to panic, especially if you’re early on in your pregnancy. But here are a few symptoms to look out for, just in case.

Back pain is a typical pregnancy symptom, but it can also be the sign of a larger problem if it’s particularly strong, sudden, or centered in the abdominal region.

Another worrying symptom is vaginal bleeding, which could be a sign of placental disruption (but there are also plenty of other explanations, such as cramping).

Also, continuous contractions in the abdomen over an extended period is a symptom that points to a possible complications

If you’re concerned that you’re exhibiting some of these symptoms, avoid self-diagnosing — there are many possible complications. Instead, see a medical professional.

Which Activities Are Safe for Pregnant Women?

Since it seems like roller coasters are out of the question, you’re probably wondering if there are any rides you can go on safely.

It’s a tricky question to answer definitively. Many activities, like roller coasters, have yet to be definitively proven as safe or unsafe, and it partly depends on the specifics.

However, you can generally expect no problems with rides designed for younger children, such as haunted houses, railroad rides, and even carousels (if they have a safe sitting option).

Disney World has plenty of attractions that it advertises as being suitable for pregnant women.

Or why not opt for something completely different (and safe), like swimming or the cinema?

Seek Your Thrills Elsewhere (for Now)

Although there’s no concrete evidence that roller coasters during pregnancy are a no-no, there’s good reason to think it would be dangerous. Why run the risk?

It’s hard — your pregnancy has already ruled out wine and limited your caffeine intake — but if any sacrifice is worth making, it’s surely this one.

Looks like you’ll have to stick to the gentle, kiddie rides for now. But hey, it’s only a few months until you can hit a rollercoaster again, and you’ll appreciate it all the more when you do.