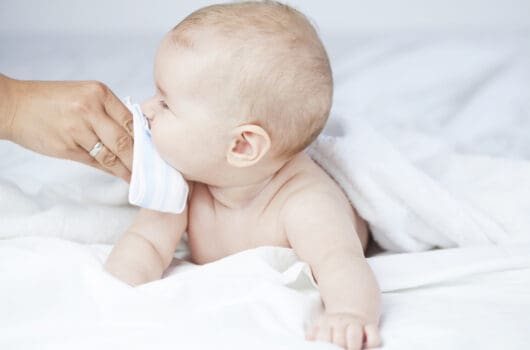 If your baby is congested, it can be hard to know what to do. Especially in children aged 3 or younger, it’s extra challenging to deal with. Primarily, this is because it’s often not obvious what is causing the problems. Toddlers and infants are prone to catching colds simply because they’re beginning to build up an immunity to some common viruses.

However, there are numerous other potential causes of a stuffy nose in toddlers and babies that need to be considered. To make matters worse, you’re also restricted to certain treatments when trying to treat a child under the age of 4. For example, you can’t use cold medications for relief as they are often dangerous for very young children.

The good news is that unless your baby isn’t eating or drinking, or unless the stuffy nose is accompanied by other symptoms, it’s probably nothing to worry about. And luckily, there are still lots of effective and safe treatments which you may try to relieve your little one’s suffering.

Causes of a Stuffy Nose in Toddlers and Babies

It can be very surprising just how much mucus can be produced by your child’s little nose. However, rest assured that it’s very normal. A stuffy nose in babies and toddlers is caused when the sensitive membranes lining their nasal cavity become inflamed. Usually, they’re no cause for concern.

Newborn babies often suffer from congestion, even if there’s nothing wrong. Newborns have mucus in their system because their immune system is still developing.

Another reason for congestion in toddlers and babies is upper respiratory viruses such as the flu, colds, and exposure to cold weather.

What Are the Symptoms of a Runny or Stuffy Nose in Infants?

There are several symptoms associated with baby congestion and they vary depending on where the congestion is located. It can be surprisingly hard to determine where congestion is, however, since babies are very small and their airways aren’t far apart.

Chest congestion, on the other hand, involves fluid inside the airways in the lungs. This is far less common and will usually only develop if your baby is unwell. Babies who sound congested but are otherwise healthy – appearing happy, and sleeping and feeding normally – is almost certainly fine.

The symptoms associated with congestion in the nose include:

On the other hand, when babies have chest congestion, the symptoms include:

Before either you or your doctor can work out the right course of treatment for your little one, you’ll need to work out the cause of your child’s stuffy nose.

If tissue and blood vessels inside your child’s nasal cavity get filled with excess fluid, nasal congestion can be the result. This makes it difficult for your baby to sleep. It can also lead to other problems such as sinusitis.

Luckily, there are a few tell-tale signs which indicate whether your little one has a bacterial or viral infections.

For instance, if your baby has a runny nose, you should take a look at the discharge and determine it’s color as this is a vital clue. Discharge that is watery and clear at first will usually be caused by a virus, although the mucus can turn yellow, green or white for several days before turning clear once more.

Congestion could even be caused by allergies. These require you to take your infant to a doctor as they may need allergy testing. If your little one has been exposed to an irritant such as cigarette smoke, this could also be causing a stuffy nose to occur.

Congestion can also occur when some food or a different type of object (for example a very small toy) gets stuck inside your infant’s nose. This will also require a visit to a doctor or even the emergency room. You should never try removing anything except mucus from your infant’s nose by yourself.

In some cases, congestion could be an indicator of a problem that is more severe. Stuffy noses due to colds are often treated by giving your child saline drops, some TLC and a little time to recovery. However, if other symptoms appear, particularly a yellow, thick mucus and a fever, you should contact a medical professional straight away.

Which Treatments Are Safe for Babies and Toddlers?

You cannot give your toddler or baby cold medications for their condition, but there are some home remedies which may offer relief from runny or stuffed noses in infants.

A safe and effective way of helping to clear your baby’s stuffy nose is by using nose drops or a salt water (saline) spray. You can purchase these over the counter with no need for a doctor’s prescription.

If using drops, put two drops inside each nostril. This will loosen any mucus inside. Immediately afterwards, use a suction bulb to take out the mucus and saline solution. Try placing a rolled towel beneath your little one’s shoulders. This will allow you to tilt their head gently backwards a little so you can be certain of getting the drops into their nose.

Before placing the suction bulb into your baby’s nose, squeeze it first. This will ensure that when the bulb is released inside their nose it can pull the mucus out from inside. When you squeeze the bulb when it’s already in the nostril, it will emit air thsat could end up pushing the mucus even further up the nose.

Once you’ve extracted the mucus, squeeze it onto a clean piece of tissue. Do this around 15 minutes before feeding your infant as well as just before they go to bed. This will assist your little one to breathe easily when they’re taking their bottle or settling down for sleep.

Be aware that some types of saline solution will contain medicine. You should avoid those. Plain saline sprays or drops are perfectly suitable. Just take care to wash out the bulb and dry it again following each use.

Using steam is another way of moistening the passages inside the nasal cavity. A humidifier or vaporizer which releases cool mist into the air of the room will usually be safe so long as it’s kept away from your infant’s grasp. Make sure, though, to place it near enough to allow the mist to reach your little one during their sleep or when you’re both together in the room playing or snuggling. Never put hot water into a humidifier, though, since burns can be the result.

In order to avoid the growth of bacteria and mold, ensure that the water is changed each day and that the vaporizer is cleaned and dried in accordance with the manufacturer’s instructions.

Another way to expose your baby to steam is to take him or her into the bathroom with you. Turn on the shower and allow the room to become steamy while holding your little one close to you for several minutes. This is a useful way of clearing their nasal passages before they go to bed.

Remember to take off layers of your infant’s clothing when it becomes warm in the bathroom, and bear in mind that you need to put them back on your child when leaving the room to prevent your baby from getting too cold.

There are some vapor rubs available for sale which have been formulated especially for use by toddlers and babies. These are perfectly safe to apply either to the soles of their feet or onto their chest, but checking with your doctor is always wise before using such products. You should also ask for details about how to use them, whatever it says on the label. You should also never put a vapor rub inside or underneath your baby’s nose.

Cold medications and decongestants should never be given to a child or baby under the age of four years. Even in older children aged between 4 and 6, you should still talk to your doctor before you give any medications of these types since it hasn’t been proven to relieve cold symptoms in such young children and they could potentially be dangerous.

Tips for Reducing Stuffiness in Babies and Toddlers

If your baby or toddler is experiencing problems with congestion, there are some other steps you can try to clear their nose.

Try putting a pillow beneath your child’s mattress. This will cause your little one to lie at an angle with their feet lower than their head. This helps to drain mucus away from their sinuses. If your infant is still a baby, though, avoid this. Pillows and any other similar items must be kept away from the sleeping area until your infant reaches the age of 2 to reduce the chance of sudden infant death syndrome (SIDS).

You should also encourage your infant to stay well-hydrated by drinking plenty of water. Fluids thin out mucus. Don’t try to force your baby to drink a lot of water, though. Even just a few sips more during the day will help.

For infants who are old enough, you should teach them how to blow their own nose. Show them how to do this by exhaling yourself through your nose and placing a tissue by the nostrils so the air can be seen moving the tissue on the exhale. Now ask your infant to blow in the same way into a tissue.

Should I Be Worried About My Baby’s Stuffy Nose?

Usually, a stuffy nose in toddlers or babies is no reason for concern, particularly when congestion is due to exposure to cold weather or a common cold. After all, both these things make adults’ noses runny too!

Struggling to Eat or Drink

You may be especially worried if your baby is struggling to take her bottle or nurse because he or she is finding it hard to suck and breathe simultaneously. This can be distressing. However, by using saline drops as outlined above, you should find that your baby can get some relief.

Accompanied by Other Symptoms

You should call a doctor if your infant’s stuffy nose is also accompanied by other symptoms such as ear pain, swollen glands, a sore throat or a fever. You should also call your doctor or go to the emergency room if you suspect there’s an object stuck inside your infant’s nose. If your baby’s breathing becomes especially labored, even when they’re breathing through their mouth, you should go straight away to the emergency room or call your doctor’s emergency line immediately.

If you think your child may have had an allergic reaction to pollutants in the environment, consulting your doctor is also a good idea, although rest assured, this is something which only occurs rarely in infants. Visiting your doctor is also important if your baby’s nasal discharge smells bad, or looks bloody or green in color.

It can be difficult sometimes to discern such secondary symptoms in infants. Therefore, if you have any worries about your baby’s blocked nose and their general comfort, you should call your doctor anyway to get peace of mind and reassurance.

Is It Possible to Prevent a Stuffed Nose in Toddlers or Babies?

Unfortunately, blocked and running noses simply are part of life both for adults and young children alike. There isn’t much, therefore, that you can do to stop them from happening. You can, however, minimize the chance of your child getting a cold or flu by taking the time to frequently wash your own hands and those of your infant.

You should also make sure that everybody coming into contact with your little one keeps their hands clean, and if anyone you know is sick, you should keep your child away from them as much as you can until they are better.