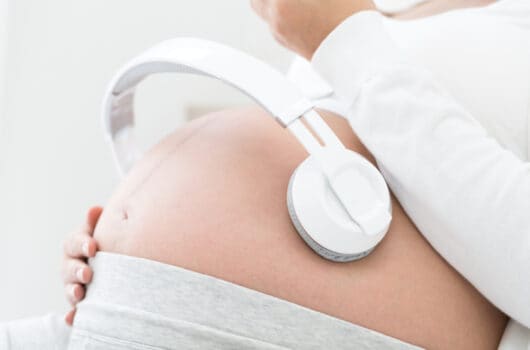 When going through a pregnancy, most people will have many questions throughout the process. One of the most common things that mom’s-to-be (and their loved ones) wonder about is when a fetus can hear. As you might expect, the sense of hearing is not something that is entirely absent at one moment and then fully developed the next. As with all functions of your tiny baby, hearing will develop in stages throughout the pregnancy.

Within just 4 to 5 weeks of fertilization, the cells in an embryo’s head are beginning to arrange themselves into positions that will become the various features, including eyes, nose, mouth, and ears. Sometime during the second month of pregnancy, your baby will begin actually growing their ears. They start out as nothing more than folds of skin that emerge on the sides of their head. This is remarkable since your baby is still only about the size of a bean, but virtually every critical system is already in place and beginning to develop. While the ears are beginning to take their most basic of form at this stage, they are not yet functional for hearing.

The latest science has found that the auditory system of your fetus will begin forming around the 18th week of your pregnancy. This is when their ears really begin to stick out and take a recognizable form. More importantly, this is also the time when the brain of a fetus starts to separate different areas that will be responsible for the different senses, including hearing. It is likely that at this time they will begin to have some level of hearing, though it is not yet clear what that would be like.

Sometime between about 22 weeks and 24 weeks a fetus begins being able to hear some noises from outside of the womb. At this stage they can only hear low-frequency noises, but that will develop quickly. Their hearing is advancing rapidly beginning around this time, and they will be able to distinguish between different sounds very soon. When expectant mothers ask when a fetus can hear, this is really the key time that they are thinking of.

For the next several weeks, the hearing of a fetus is becoming much more sensitive. At this time your baby will be able to distinguish between many different types of sounds, and even turn their head toward the source of a noise. They can also be startled awake dur to loud or sudden noises. Your baby will also begin to able to recognize the voice of its mother during this stage. By the end of the sixth month of pregnancy, the auditory system of a fetus is fully developed. 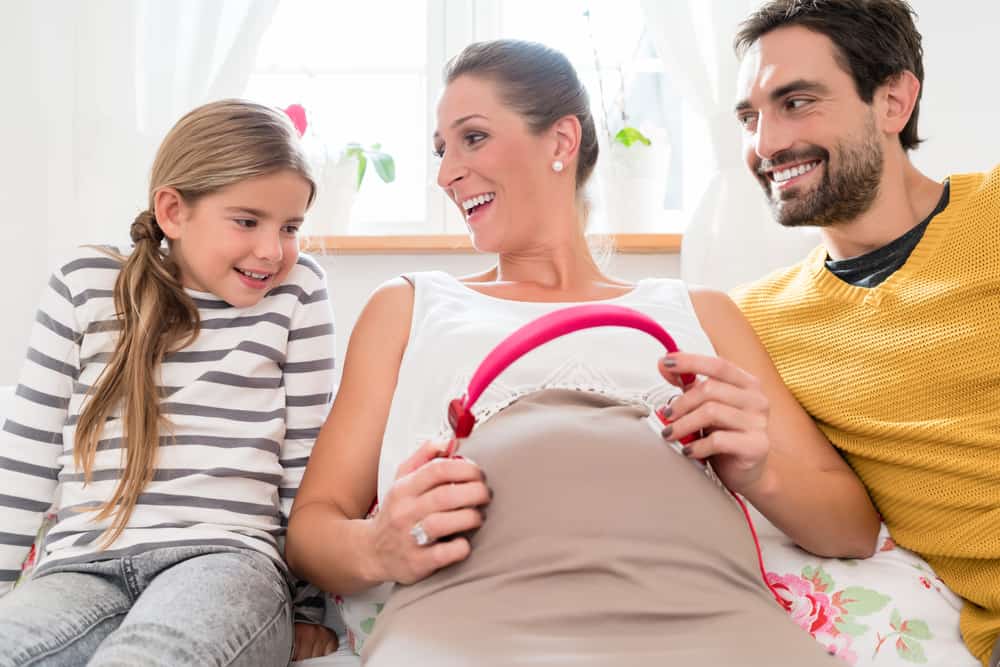 Understanding the fetal development of the auditory system is very important, and extremely interesting, especially for expectant parents. Beyond knowing the timeline of when a fetus can hear, however, there are often many other related questions that mom’s and dad’s to be will have. The following are some of the most frequently asked questions related to fetal hearing.

Will the Baby Recognize Different Voices in the Womb?

There is significant scientific evidence that the fetus will recognize the voice of its mother while still in the womb. Even after it is born, the baby will know the mother’s voice. This has been shown by the fact that the heartrate of the fetus before birth, and the infant after, will slow and become calmer when the mother’s voice is heard. There is no evidence, however, that the fetus is able to distinguish other voices while still in the womb. This is likely due to the fact that the voices would be more muffled than the mothers.

How Loud Are External Noises in the Womb?

In the womb, the fetus is protected by the mother’s body from virtually every type of hazard, including excess noise. Not only is the mother’s body going to stop a lot of the sound from reaching the fetus, but the fact that it is living within the amniotic fluid rather than surrounded by air helps to further drown out the noise. It is estimated that noise that does reach the fetus is about half as loud as it would be outside of the womb.

While it is unlikely that loud noises that you experience during regular day to day life will cause any harm or even discomfort for your unborn child, it is best to avoid extremely loud situations. It is also a good idea to avoid areas that are consistently loud for extended periods of time such as some factories. Some evidence has indicated that these types of loud noises can cause elevated stress on the fetus.

Should You Play Music for a Fetus?

Since we know that a fetus can hear in the womb, many people wonder if there are any benefits to playing music for the fetus. It has actually become quite popular to play classical music using specially made speakers that are applied directly to the mother’s belly. This will allow the music to travel more directly into the womb.

Some people believe that playing this type of music for a fetus will help them to have an increased IQ or other developmental benefits. There have not been enough scientific studies to prove that this is actually the case, however. Many mothers, however, have noted that their unborn child calms down when they play certain types of music, which is why this type of thing continues to be very popular.

A growing number of people are suggesting that rather than playing music directly for the fetus, a mom-to-be should enjoy her favorite songs normally but sing along to them. This allows the fetus to not only hear some music, but also the mother’s voice, which is known to be soothing.

How Common Is Hearing Loss in the Womb?

Hearing loss is not very common in newborns, impacting less than 3 out of every 1000 babies. Despite the fact that hearing loss is quite rare, doctors will perform basic hearing tests if they suspect that your child is having any problems.

The medical staff, and the parents, should watch the newborn to see if it looks towards noises, is startled by sudden noises, or can be awoken by noise. If they notice that the baby is not responding to these things normally, they can perform additional testing to measure brain activity based on different sounds, which can help to determine if there are any problems in this area.

What Can Cause Fetal Hearing Defects?

There are a number of different things that can cause hearing defects with an unborn child. In the vast majority of cases, these defects would not be discovered until after the baby is born. The following are some of the more common causes of fetal hearing problems:

Caring for Your Child’s Hearing at Every Stage

The development of the auditory system is something that begins in the womb and continues after birth. Learning about how this developmental process normally takes place, and what types of things to watch out for, will help you to do everything you can to ensure your little one does not have any problems.

In the event that your child is born with hearing issues, however, there are things that doctors can do to help. This can include therapeutic efforts, surgical procedures, and even devices such as the cochlear implant, which bypasses the normal hearing process and interacts directly with the auditory nerve.

So, while you always want to do everything possible to ensure your child develops normally, even if there are concerns for their hearing, you can be confident that they will be able to get the needed treatments that will allow them to hear.