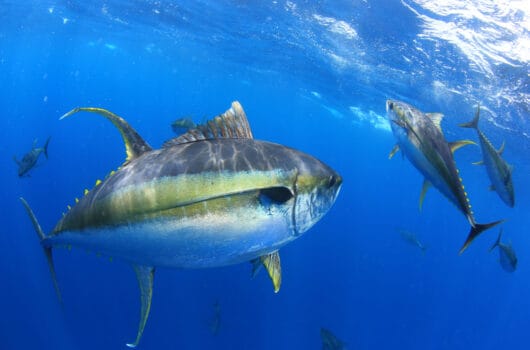 When you become pregnant, advice abounds from friends and family about what you should eat. Try this, but not that. Don’t each too much, and certainly not too little! But how can pregnant women know what they should actually eat? Imagine, you’re about to make a delicious tuna fish sandwich, but maybe you’ve heard that some fish have to be eaten in moderation because they can have mercury in them. If you’re pregnant, you might just try to play it safe and not eat any fish, including tuna. But that might not be the best way to handle the situation.

The FDA advises that eating fish while pregnant can provide health benefits both for the mother and developing child. But don’t worry, there are guidelines to follow so that you and your growing baby can balance the nutritional benefits of eating fish while lessening the risks.

The FDA’s 2015-2020 Dietary Guidelines recommend that pregnant women eat eight to twelve ounces of seafood a week, including a variety of fish and shellfish. The FDA goes even further with advice for pregnant and breastfeeding women about eating specific types of fish.

So what does the FDA say about the tuna fish you want to eat?

It turns out that different types of tuna have different levels of mercury in them. The FDA breaks up fish into three categories: best, good and avoid. Canned light tuna (originating from skipjack) is on the “best” list, and it’s recommended that eight to twelve ounces be eaten a week. Both albacore and yellowfin tuna are on the “good” list, and only four ounces a week should be eaten; however, bigeye tuna are on the “avoid” list and shouldn’t be eaten at all.

Benefits of Eating Fish While Pregnant

Fish is high in healthy proteins, fats, and minerals. One five-ounce can of light tuna in water provides a whopping 20 grams of protein! You’ll also receive large amounts of the minerals niacin, Vitamin B12, and selenium–all important for the health of your steadily growing boy or girl.

Fish must be eaten in moderation because it can contain a heavy metal known as methylmercury. This heavy metal is not readily excreted and can cross the blood brain barrier as well as the placenta in pregnant women. Studies have linked methylmercury exposure to increased risk of various conditions, such as developmental deficits in children and cardiovascular disease in adults. If you consume fish with high levels of methylmercury, you will be exposed to greater amounts of this heavy metal. You might be wondering how and why mercury gets into a fish like tuna at all. It turns out there are a variety of sources.

Why Do Fish Contain Mercury?

The UN environment program performed a study that looked at where the mercury in oceans came from. They found that 10% of mercury being added came from natural sources like volcanoes or underwater thermal vents. While the remaining portion either came directly from human sources (like burning coal in a power plant) or from floods that took mercury people left in soil and put it into the ocean.

Once in the ocean, mercury is absorbed by algae. Fish that eat algae will then start to accumulate mercury in their bodies. An algae-eating fish that lives a short life will have less mercury in it than an algae-eating fish that lives a long life. What can make it even worse is a fish that eats smaller fish. Every time they feed on a smaller fish, they absorb all of that fish’s mercury. The end result is that top predator fish, like shark or tuna, end up having the highest level of mercury. 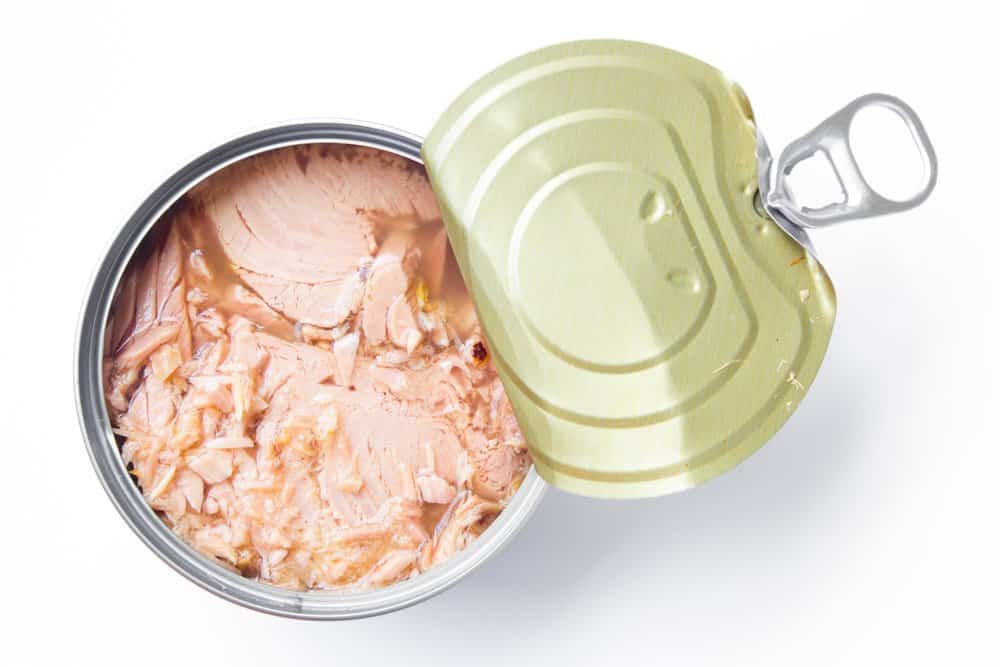 It turns out not all canned tuna is the same!

If you look at the store shelves, you’ll find either light or white canned tuna. And while these sound similar, they are actually quite different.

White tuna is made from albacore. These fish have up to three times as much mercury in them as skipjack and are in the “good” category according to the FDA. So feel free to eat up, but remember that only four ounces can be eaten a week.

It can be tricky to figure out what type of tuna you are eating, so make sure you carefully read the tin. If you’re unsure, choose another brand that’s more clear. Or play it safe and assume you can only eat one serving for that week.

How Many Cans of Tuna Can You Eat When You’re Pregnant?

A typical can of tuna weighs five ounces. But most people drain the liquid off, leaving just four ounces of tuna meat. That means one can of tuna is one serving. If you’re sticking to light tuna, then you can have two or three cans of tuna in a week. If you choose to eat “tonno light” or white canned tuna, then stick to one can a week.

Safe Fish to Eat While Pregnant

Given the large selection of fish available at grocery stores and restaurants, it’s important to understand which fish are the safest to eat while pregnant. In general, the smaller the fish or shellfish, the better. Several organizations have assembled convenient lists of safe fish to eat. For a complete list of safe fish, check out the FDA’s advice on eating fish or the Natural Resource Defense Council’s wallet card on mercury levels in fish.

Fish to Avoid While Pregnant

There are several types of fish that shouldn’t be eaten at all while you’re pregnant. These fish include King mackerel, marlin, orange roughy, shark, swordfish, tilefish from the Gulf of Mexico, and bigeye tuna. So if you have a craving for one of these big boys, hold off until you’re no longer eating for two.

What Is a Serving of Fish?

The FDA recommends eating four, eight or twelve ounces of fish, depending on which type of fish you are eating. But it’s not so easy to figure that out when you’re standing in your kitchen or looking at a dinner plate in a restaurant.

So what can you do?

As a guide, you can use the palm of your hand to measure. A piece of seafood about the size of your palm (without the fingers) is four ounces. So if you order yellowfin tuna at a restaurant, a fish that is a “good” choice, be sure to not eat more than a palm’s worth. Then maybe pass on seafood altogether for about a week.

Can I Eat Raw Fish While Pregnant? 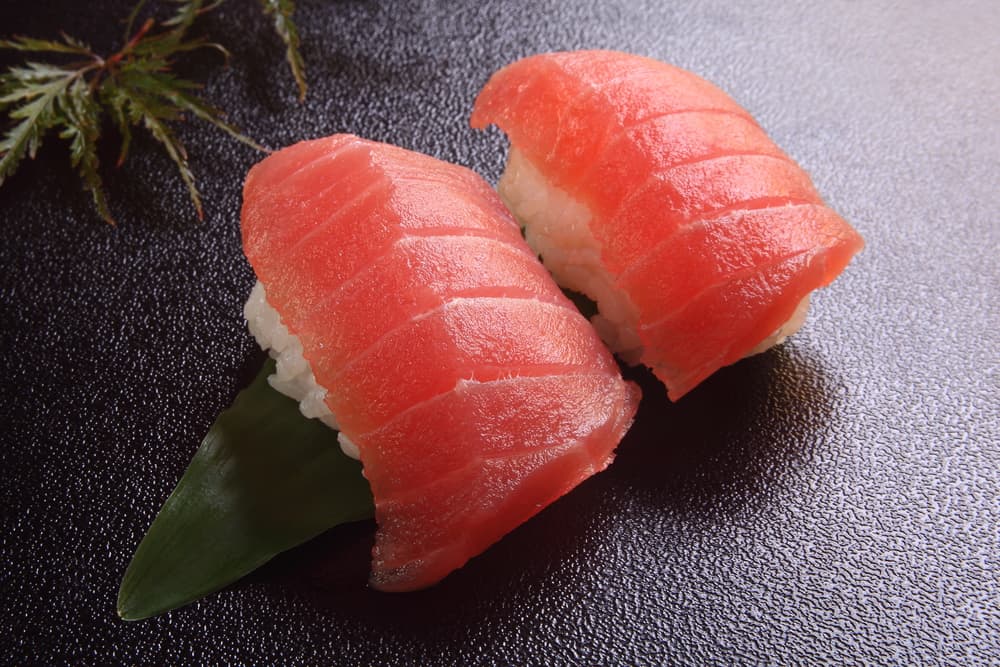 If you think eating raw fish is a no-no while pregnant, think again! Eating raw fish, such as in sushi, can be a great way to get some seafood into your diet. There’s just a few things to keep in mind.

The danger of eating raw fish is that they could have parasites. So any raw fish you eat needs to be treated in some way that kills those parasites. This can be freezing the fish (a common practice for sushi-grade fish), pickling or smoking.

You’ll need to know more if you’re planning to dine in at your local Japanese restaurant. Most raw shellfish isn’t frozen, so you should avoid them. This includes shrimps, prawns, crabs and scallops. Luckily, most fish in the U.S. is required to be frozen before being sold as sushi.

The exception to this is farmed salmon, which can be grown for the purpose of being made into sushi and isn’t required to be frozen. You can ask your waiter to check if your salmon was frozen. Or play it safe and just order a smoked salmon nigiri to get your fill of salmon.

Tuna is generally frozen before being used as sushi so feel free to partake, as far parasites are concerned. But make sure you don’t overeat! Sushi-grade tuna often has more mercury than standard-grade tuna.

Be Mindful When Eating Tuna While Pregnant

While mercy poses a risk if you’re pregnant or breastfeeding, it can be done safely if you’re thoughtful and carefully follow guidelines. Watch how much you eat, only partake in the safest forms of tuna, and be aware of the risks. If you’re careful, you can still enjoy tuna while ensuring both you and your baby are happy and healthy.