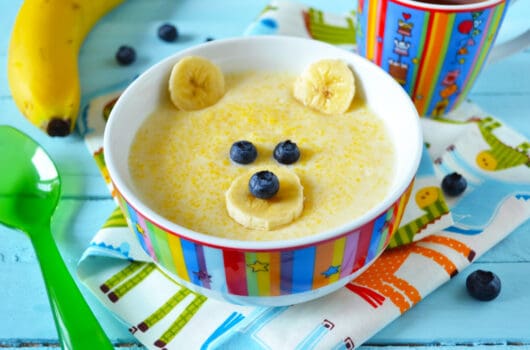 Some doctors recommend it, but the information isn’t as concrete as we’d like it to be. Read on to learn about whether or not cereal is suitable for babies.

When Are Solid Foods Introduced?

Every child is different, but doctors recommend introducing solid foods around 4-6 months. While 4-6 months is the norm, how do you know when it’s time to introduce solid foods? There are three signs that your child is ready to make the jump from liquid to solid foods.

Your Child Has Good Head Control

Head control is essential for eating solid foods. If they can’t keep their head up on their own, you’ll want to keep serving up liquid alternatives. So, what does proper head control look like?

You’ll also want to make sure it doesn’t look like they’re struggling to keep their head straight. For example, if your child is frequently moving their head around, that’s a sign that they’re not ready. Always be patient and never rush your child.

Your Child Is Teething

If your child has started teething, there is a good chance they’re ready for solid foods. Teething typically begins between four and six months, and it’s easy to notice. Keep an eye on your child to see if they’re constantly chewing on their toys, utensils, and pacifier.

You’ll also be able to notice a few physical changes in your child. If they’re first set of baby teeth is starting to come in, you’ll be able to see the teeth when they open their mouth. If possible, hold off on solid foods until they have most of their baby teeth because their gums are vulnerable.

Your Child Opens Their Mouth When Food Is Offered

We know how difficult feeding a baby can be. They always keep their mouth shut and make a fuss whenever it’s time for a spoonful of baby food. While this is normal for the first few months, your child will grow out of this phase.

The next time you feed your child, if they’re leaning forward and opening their mouth, it’s time to try solid foods. This shows that they have reasonable head control, don’t need help sitting up, and have enough confidence to chew food on their own.

The Truth About Baby Rice Cereal

Baby cereal comes in a lot of different shapes and sizes. There is cereal derived from rice, grains, vegetables, and oats. With an abundance of varying baby cereals, it’s clear that some work better than others. Let’s take a look at the research. We’re going to start with infant rice cereals.

The rice used in baby cereals isn’t very high in nutrition because it’s derived from white rice. While white rice makes for a nice side dish, it’s nutritional value is abysmal. There isn’t much protein, fat, vitamins, or other nutrients.

To compensate for the lack of nutrients, cereal makers synthetically fortify the rice with iron, vitamin B9, and vitamin C. So, while it resembles white rice or baked flakes, most of the nutrition is synthetic.

The Benefits of Baby Rice Cereal

Baby rice cereal has a lot going for it. While recent studies have shown that it’s far from the perfect source of nutrition, it’s great for iron, vitamins, and minerals. According to Fox, baby rice cereal is an excellent source of iron and zinc.

Breast milk becomes less effective as a child grows older. This is your body’s way of returning to a pre-pregnancy state. This is a normal process, and it happens to every mother. The only issue is that breast milk starts to contain less iron and zinc, which your child needs to grow and develop a robust immune system.

For this reason, doctors recommend using infant rice cereal as a supplement. Even if you want to continue breastfeeding for a few months, mixing in some rice cereal is a great way to make sure your child is getting the nutrition they need.

The Dangers of Baby Rice Cereal

Arsenic is a toxic chemical that’s harmful in large doses. The FDA recommends keeping arsenic below 100 parts per billion to keep your child happy and healthy. Luckily, baby rice cereal, made with both brown and white rice, have shown improvements to meet the FDA guidelines.

As long as you’re not feeding your child rice cereal three times per day, it’s safe to eat. With that said, you shouldn’t rely on baby rice cereal as your child’s primary source of nutrition. While it’s great for iron, your child can get their daily vitamins and other minerals from different sources.

Baby Rice Cereal When Used as a Sleeping Aid

One of the more common uses of baby rice cereal is to help with sleeping. Some doctors recommend adding small amounts of white rice to your baby’s bottle at night. This recommendation is supposed to lead to a better night’s sleep with less fuss.

While it works in some cases, research shows that it’s not necessary or practical. For example, one study revealed that babies that had rice-based baby cereal before bed were more restless than babies that didn’t have the cereal.

Have you ever noticed that babies need to eat often? That’s because their stomachs aren’t big enough to keep them full for eight hours. Infants have a smaller stomach than adults. Their belly is roughly the size of a baseball, which means they don’t have enough space to store foods other than milk. While the baby rice cereal might put them to sleep, it won’t last long.

Rice cereal has also led to an increase in diabetes when used in infants younger than five months old. This commonly occurs in the evening hours because rice cereal leads to a spike in blood sugar and the release of insulin. Too much insulin builds insulin resistance, which turns into diabetes. The release of insulin will cause drowsiness in your child, resulting in sleep, but that sleep comes at a cost.

What About Organic and Brown Rice Cereals?

What About Grain-Based Cereals?

While infant rice cereal is the gold-standard and most common baby cereal, you’ll come across cereals made with wheat or barley.

These cereals introduce your child to sources of gluten, which is the main protein of wheat and barley. With the rise of food allergies, like Celiac Disease, many parents are concerned about feeding their child gluten products. So, are oats and grains safe? Let’s take a look.

Safety Concerns of Grains and Oats

While gluten scares a lot of people, there is no need to avoid it entirely. Babies should be exposed to a wide variety of solid foods, and grains are one of them. According to Doctor Anthony Porto, there is no reason to avoid feeding your child grains. Instead, he recommends introducing grains between 4-6 months.

There are also a few studies that show a correlation between eating allergy-inducing foods and not developing food allergies. For example, if your child is eating peanut butter when they’re between 4-9 months old, it’s possible that a food allergy won’t surface.

This can be applied to the most common food allergy foods. If you’re concerned about gluten allergies, feeding your child gluten when they’re 4-9 months can prevent this from occurring. Still, you should monitor your child closely to make sure they’re not having an adverse reaction to their food. 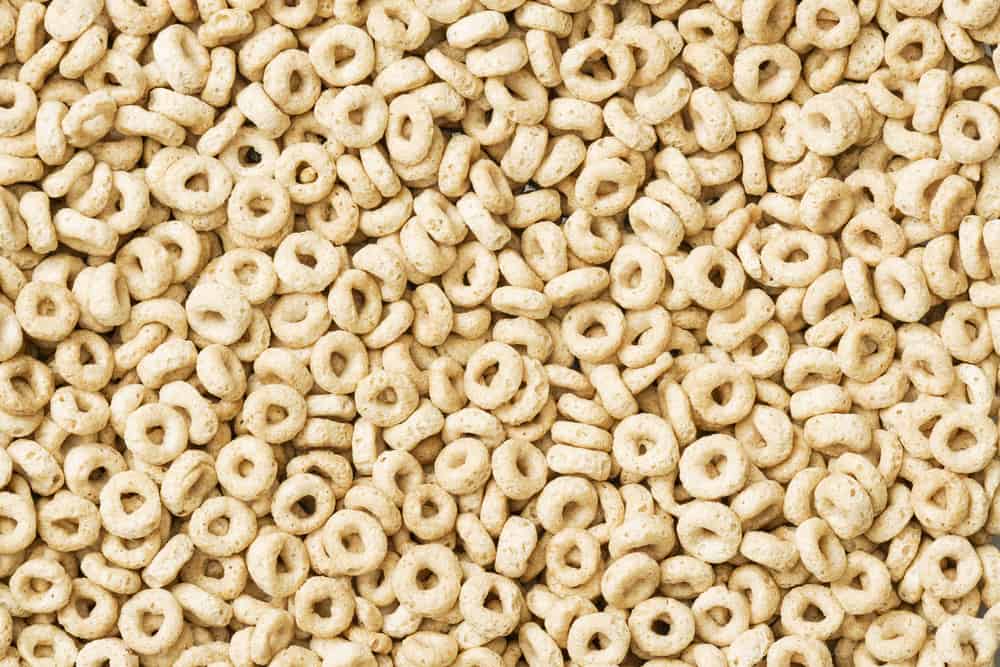 While infant rice cereal and wheat-based cereals are great for babies between 4-6 months, what about regular cereal? Regular cereal requires a careful approach, but most doctors recommend introducing adult cereals between 8-12 months old.

There is a lot of cereal to choose from, literally hundreds of brands, so what cereal can you use? We’re going to take you through a few types of cereal that are great to start with.

There is a lot of cereal out there, and while you might go Coocoo for Cocoa Puffs, you’ll want to start with simple cereals. Simple cereals are typically puffy and round, which makes them easy to swallow because they melt in your mouth. Simple cereals are also made with a handful of ingredients and don’t use artificial colors.

When you’re at the store, look for cereals that contain ingredients you understand. If there are long and complex words, there is a good chance the cereal is packed with artificial flavors. You should also consider cereals that have less than five grams of added sugar and a few grams of fiber to strengthen your child’s digestive system.

A great example of a simple cereal is cheerios. They don’t have a lot of flavor, but they’re safe for children between 8-10 months. Their puffy texture makes them easy to swallow, digest, and hold. Cheerios are also made with five simple ingredients and contain three grams of fiber, only one gram of sugar, and no artificial colors.

Some other great cereals include Corn Flakes, Brown Rice Crisps, New England Unsweetened Granola, unflavored Rice Chex, and Kix. These cereals seem boring, but once your child turns one-year-old, you can begin to experiment with more cereals.

Keep an Eye on Food Allergies

Traditional food allergies are easy to notice, and they’ll show themselves abruptly. If you see that your child develops hives or has trouble breathing after a meal, there is a good chance that they’re allergic.

Food allergies can also induce symptoms like a swollen tongue, esophagus, and cheeks. While gluten and peanuts are common food allergies, you should also be careful with cereal that includes:

While these foods cause 90% of food allergies, some children have adverse reactions to other foods. So, always keep an eye on your child to make sure they’re not having an adverse reaction to their cereals.

Celiac Disease affects 1 in 100 people across the globe. It’s a common food allergy that’s caused by an immune response to the main protein in wheat, gluten. Gluten allergies have become more common in recent years, with more people from each age group developing the condition.

While these symptoms are difficult to notice in infants, there is one dead giveaway: crying and trouble sleeping. If your child is frequently crying after a gluten-filled meal or having trouble after a bedtime meal, you should reach out to your doctor.

Baby cereal and regular cereal are safe, depending on the age of your child. While recent studies have frightened parents about the risk of arsenic, infant rice cereal is held to strict FDA guidelines, and it’s safe to eat. Furthermore, there is no need to hold off on introducing gluten into your child’s diet.

Everyone’s child is different, so make sure you pay attention to how your baby reacts to new foods. If your child shows signs of a food allergy, remove that food from your child’s diet. Otherwise, good luck, and enjoy making those messy memories!