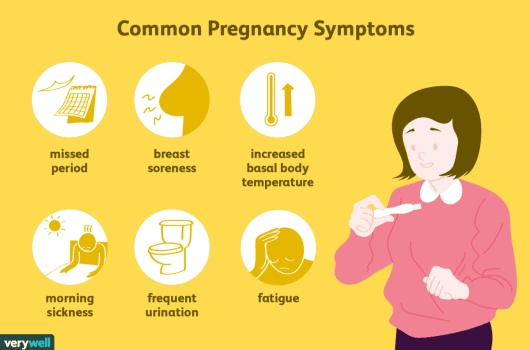 Taking a pregnancy test or having an ultrasound scan is the only true way to determine whether or not you’re pregnant. However, there are some other pregnancy symptoms you should be looking out for if you’re trying to conceive. There are some early signs that indicate you’re expecting, and some may even occur before you miss your first period. We’ll also go over some things you can expect to experience if you already know you’re pregnant.

When Do Pregnancy Symptoms Start?

While it sounds strange, the first week of any pregnancy will be based on your LMP (the date your last period began). That means that your last period is actually the first week of your pregnancy, even though you weren’t actually pregnant then. Your expected date of delivery will be worked out by using that date, so even those early weeks when you don’t experience any symptoms will still be counted as part of a 40-week pregnancy.

A Timeline of Pregnancy Symptoms

Although every woman and every pregnancy is different, this timeline should give you an idea of what to expect and when different symptoms are likely to appear.

Pregnancy Symptoms Before a Missed Period

Between week 1 and week 4 of your pregnancy, everything will be taking place on the cellular level. A blastocyst is created by your fertilized egg that then goes on to develop into your baby’s body parts and organs. A couple of weeks after conception (in week 4 of your pregnancy), the blastocyst implants in the uterus’ lining and this may result in implantation bleeding. Some women mistake this spotting as a period that is lighter than normal.

How Can You Tell the Difference Between Implantation Bleeding and a True Period?

The color of the spotting will be brown, red or pink, and the bleeding will be much lighter than a regular period. You may experience cramping and pain along with the spotting. Implantation bleeding usually lasts 3 days or less and requires no treatment. Cramping may continue, however, and some women report that they experience cramping sensations in their lower uterus for a few weeks into their pregnancy.

Once the blastocyst has implanted in the uterus, your body starts making hCG (human chorionic gonadotrophin). This is a hormone that helps your body to maintain your pregnancy and tells your ovaries not to release any more eggs. Usually, four weeks following conception you’ll miss your first period. However, for some women, irregular periods are common. Also, periods can be missed due to stress, or irregular taking of contraception. A missed period is not always a sign that your pregnant.

Therefore, taking a pregnancy test is the best way to be certain of whether or not you’ve conceived. Most home pregnancy tests are capable of detecting the hCG hormone as early as 8 days following your missed period. Some even claim to be able to confirm a pregnancy from the date your period was due. If you take a test and it turns out to be negative, that doesn’t necessarily mean that you aren’t pregnant. It could mean that you tested too early. Wait a few more days, and if your period hasn’t arrived, test again.

Most pregnant women feel extremely tired at some point during their pregnancy, but it’s an especially common symptom in the early weeks as your progesterone level will soar, making you feel tired. It’s important to rest and get plenty of sleep at this stage. You may find that it’s helpful to keep your bedroom cooler than usual since your body temperature often rises in the early pregnancy stages. This will help you to get a more restful night’s sleep so you can cope better with the challenges that early pregnancy throws at you!  Getting more iron into your diet will help you combat fatigue.

As early as week 4 you’ll probably notice changes taking place in your breasts. They will probably feel more tender and be more swollen because of hormonal changes. Within a few weeks, this will subside as your body begins to adjust to the pregnancy hormones. These early changes can be very similar to those you experience before your period is due, but often the discomfort is greater. You may notice that your breasts feel heavier than usual and the veins are more visible. Breast and nipple changes will also occur at the end of the first trimester, with the areola surrounding your nipple growing larger and becoming darker in color. Although breast tenderness is uncomfortable, you can relieve the pain by wearing a supportive, wire-free, cotton, maternity bra with adjustable clasps so you can continue wearing it throughout your pregnancy. You may also want to fit breast pads in your bra to minimize friction that could be causing nipple pain.

During the early weeks of your pregnancy, you’ll be at the mercy of your soaring hormone levels. Both progesterone and estrogen will be at very high levels and this affects your mood, making you more reactive and emotional than usual. Most pregnant women suffer from mood swings and they can kick in during the first few weeks. You may go from feeling euphoric one moment to feeling anxious or even depressed the next. This can be difficult to cope with, but it will pass with time. If you feel that you’re consistently suffering from a low mood, though, and are finding it difficult to go about your everyday routine, you should discuss your feelings with a medical professional so that you can get the help you need.

Headaches and Back Pain

Many pregnant women report that they suffer from more headaches than usual during the first few weeks of their pregnancy, or that their back hurts more regularly. These are partly caused by increased blood flow around the body and partly because of those fluctuating hormone levels. While headaches can be quite normal at this stage, if yours are very severe it’s always wise to consult your doctor. Not only will they be able to rule out any more serious potential problems, but they’ll also be able to advise you as to which medications are safe to use during pregnancy to relieve your suffering.

Are You Urinating More Often?

When you’re pregnant, your body increases the volume of blood pumping around it. As a result, your kidneys need to process even more fluid than they usually do and so more fluid ends up in your bladder. All of this means that you’ll need to run to the bathroom a lot more often, even during the early weeks. Although this can be irritating, it’s still important to stay well-hydrated, so make sure you drink plenty of water.

Not only may you need to urinate more often, but you may also notice you have a lot more vaginal discharge than usual. This is completely normal in the early stages of pregnancy and as long as there is no irritation or soreness you don’t need to do anything about it, other than perhaps wear an underwear liner.

Is My Period Coming or Is My Bloating a Pregnancy Symptom?

You may experience bloating when your period is due to start, and in early pregnancy, you might experience the same kind of symptoms. This is because of hormonal changes that slow down your body’s digestive system. This can also cause constipation that only increases the bloating further. It will also cause excess gas, which may be a recurring symptom throughout the pregnancy.

You won’t actually be gaining weight due to the growing fetus yet. In fact, weight gain won’t become more pronounced until around week 12 of your pregnancy, but you could gain around 1-4 lbs during these early weeks.

One of the most famous pregnancy symptoms of all is morning sickness. This tends to kick in between week 4 and week 6. The term “morning sickness” is actually a misnomer since it can strike at any time, night or day. Doctors don’t know precisely why nausea occurs during this stage of pregnancy, but it’s believed that hormones are to blame. Becoming sensitive to smells is an early sign of pregnancy that can also contribute to vomiting and nausea, with some women developing a distaste for some foods. Even the smell of cooking may prove to be too much for some pregnant women.

Even if you used to love a cup of coffee or fatty foods, you might find that you can suddenly no longer stand the smell or taste of them. You may also notice a strange, metallic taste in your mouth and you may crave different foods, perhaps even those that you never particularly enjoyed before. If you’re a smoker, you may also lose interest in cigarettes (which is, of course, a good thing if you’re planning to quit).

For some women, the sensation of nausea is quite mild, but for others, the vomiting is severe and becomes even more intense as they approach the end of their first trimester. It can be helpful to keep some saltine crackers at your bedside so you can eat a couple before getting up. Ginger cookies can also be helpful in relieving nausea symptoms. If you’re unable to keep any food or fluids down, you should see your doctor. ‘Morning sickness’ will tend to subside at around the 8 – 12 week mark, as you enter the second trimester.

Most people know that pregnant women are prone to fainting and this is often due to a drop in blood pressure in the early weeks of pregnancy. This drop may also result in light-headedness or dizziness because of the dilation of the blood vessels. When you visit your doctor or midwife for your first antenatal appointment, they will take your blood pressure to determine whether it’s healthy or not. Meanwhile, you should switch to an exercise regime that is more pregnancy-friendly and make sure you snack regularly and stay well-hydrated to guard against dizziness. When standing up from a seated position you should also make sure to move slowly. Between weeks 8 and 10 of your pregnancy, you’ll probably notice that your heart is working harder and faster. Arrhythmias and palpitations are quite common during pregnancy because of hormonal changes, but if you’re already suffering from a heart condition you should see your doctor to make sure that you are on the right medication.

Your fluctuating hormones are responsible for a lot of the pregnancy symptoms you’re experiencing in these early weeks, and another side-effect of those changes can be heartburn. Hormones cause relaxation of the valve between the esophagus and stomach so stomach acid can leak upwards, causing this uncomfortable condition. You can help to prevent this problem from occurring by eating more smaller meals each day rather than three big ones and by sitting upright for an hour after eating so your food can digest properly. If you feel you need to take antacids, speak to a doctor to ensure you’re taking a safe medication.

If you’ve been experiencing some of these pregnancy symptoms but haven’t taken a test yet, it could be time to go out and get one. However, if you haven’t had a missed period yet, it could still be too early and your result may not be accurate. When you get a positive pregnancy test result, you should call your doctor straight away to arrange your first antenatal appointment. The earlier you begin getting the right pregnancy care, the more comfortable your nine months will be. Of course, if you’re experiencing any symptoms that are causing you concern, you should consult your doctor as soon as possible.

Although some of the pregnancy symptoms you’re experiencing at this early stage can be very unpleasant and difficult to live with, remember that they are usually short-lived. Once the second trimester arrives, the most challenging symptoms such as morning sickness and heartburn tend to subside and you can usually enjoy the classic “pregnancy glow” that is associated with this time of your life.