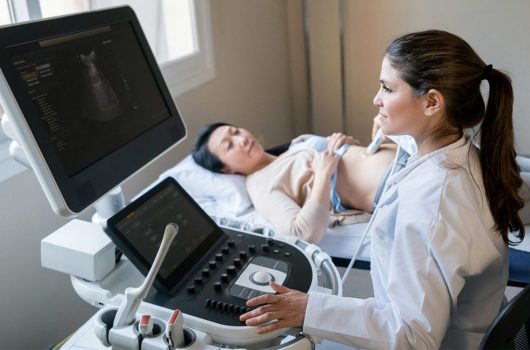 If you’re pregnant, one of the questions that you might be asking is “when and how can I find out the sex of my baby?” It’s a common query that many prospective parents want to be answered. After all, one of the most exciting things when preparing for a new arrival is picking out baby clothes, toys, accessories and nursery furniture, and knowing whether you’re going to have a boy or a girl can help you to make a well-informed choice.

While there will always be some moms and dads who would rather have a surprise when their little one is delivered, most are desperate to learn as early as possible which sex their newborn is. So, here we take a closer look at the various ways of finding out whether your fetus is male or female and when each method is effective.

Will an Ultrasound Scan Tell Me the Sex of My Baby?

Most women who find out the sex of their baby before delivery do so at their mid-pregnancy ultrasound scan. Typically, this will take place between 16 and 20 weeks of pregnancy.

Your baby’s vulva or penis will begin to form at around six weeks, but girls and boys still look extremely similar on an ultrasound scan until around 14 weeks or so. Even after that, it can be difficult to be certain about the sex of your fetus. This means that if your mid-pregnancy scan is closer to 16 weeks than 20 weeks it still may not be possible to tell the sex of the baby with any confidence.

By around 18 weeks, a skilled technician should be able to spot the tell-tale signs that indicate a boy or girl baby, but even then, there are no guarantees. If your baby is not in the right position to allow the technician to view their genitals, there’s no way of knowing. In such cases, you may be able to arrange another ultrasound scan at a later date, but again, this may not be possible.

Also, It’s not unheard of for hospitals to have a policy of not telling parents-to-be whether they’re having a boy or a girl, so even if the technician can see a clear vulva or penis they may not be permitted to tell you. They may allow you to look at the monitor during the scan to see if you can work it out for yourself, but it can be difficult for the untrained eye to spot these small details on a rather blurry ultrasound.

You may be able to have a 3D scan carried out that will give you a much clearer view of your baby. Many parents-to-be love these scans since they allow you to see details that simply cannot be viewed on a regular 2D ultrasound. Of course, you’ll also have a better chance of seeing definitively what sex your baby will be on this type of scan. Again, though, you’ll need to wait until at least the middle of your pregnancy before having this type of scan to be able to tell for certain whether you’ll be having a boy or a girl.

Can a Blood Test Tell Me My Baby’s Sex?

There is a blood test that can be carried out that can tell you what sex your baby is. This is known as NIPT (Non-invasive Prenatal Testing). This blood test is usually used to detect whether or not a baby has Down’s Syndrome or another chromosomal condition. It can be carried out from ten weeks into your pregnancy. Not only does this test detect whether a baby has a chromosomal condition, but it also looks for male sex chromosomes in your blood. This lets you know whether or not you’re having a boy.

Usually, this test is only used on women who are at high risk of having a baby that has a chromosomal disorder. Yet, in some cases, it may be available to other women who are at lower risk. You can discuss having this test carried out with your healthcare provider to find out whether they think that it’s appropriate for you.

Can Amniocentesis or CVS Tell Me My Baby’s Sex?

Two other genetic tests can be carried out on a pregnant woman that will give a definitive answer about the sex of the baby. However, neither should be done without good cause. CVS (chorionic villus sampling) and amniocentesis tests are typically done to find out if the baby is suffering from Down’s Syndrome, a chromosomal disorder or a genetic abnormality.

Usually, CVS will be carried out between 10 – 13 weeks. Amniocentesis will usually be performed between 16 – 20 weeks. Both tests are very invasive and may, in a few cases, result in miscarriage. Therefore, women who don’t have an increased chance of having a baby with these medical problems aren’t generally offered these tests. If you are being offered one of these tests, though, it will let you know whether you’re having a boy or a girl as well as whether or not your baby has any chromosomal or genetic issues.

Will I Find Out What Sex My Baby Is If I Have IVF?

Some women who have IVF (in vitro fertilization) to become pregnant will have pre-implantation genetic testing. If you have this carried out, the embryos will be tested for any chromosomal or genetic abnormalities. At the same time, they will also be tested to see whether they are male or female. This type of testing is virtually 100% accurate when it comes to determining the embryo’s sex.

Should I Find Out the Sex of My Baby?

Not everyone wants to know whether they’re having a boy or a girl. There are plenty of parents-to-be who would rather have the excitement of a surprise at the end of those nine long months of pregnancy. If you would rather not know the sex of your unborn baby there’s absolutely no reason to feel pressured into finding out. These days, there is an expectation that everyone will find out before delivery what kind of baby they’ll be giving birth to, but rest assured that you won’t be told if you don’t want to know.

At your ultrasound scan, the technician should ask you whether or not you want to know the baby’s sex. If you’d prefer it to be a surprise, you can simply say no. If you’ve had blood tests that reveal the sex of your little one, you can simply ask for that information to be left out of the paperwork that you see. Your healthcare providers won’t ruin the surprise for you!

Would a Gender Predictor Test Tell Me the Sex of My Baby?

For centuries, women have been trying to predict what sex their baby would be, and there is no shortage of at-home tests that all claim to give you a definitive result. Naturally, some appear to be more scientific than others.

A quick internet search will turn up all kinds of techniques that are suggested to tell you whether you’re having a girl or a boy. Some are as simple as holding your wedding ring (if you have one) on a string over your stomach and seeing whether it moves in a line or a circle. Others involve looking at complex charts or comparing your symptoms. While these methods are a lot of fun to try out yourself, perhaps at your baby shower with your friends, none of them are proven to work or be accurate in any way.

There are some other gender predictor tests available, though, that appear to be a lot more scientific. Yet, none of these have been endorsed by professional medical bodies or organizations.

One common predictor is the Ramzi theory. This method suggests that you look at your ultrasound scan and determine the position of the placenta. If it’s developing on your right side, the theory says that you’re having a boy, while if it’s forming on the left you’re supposed to be having a girl. Despite the popularity of this method, it has been put to the test by experts and been found to be inaccurate. In fact, there’s a 50/50 chance of being correct in your prediction – exactly the same as if you’d just guessed!

There are other at-home gender prediction kits available for sale (usually over the internet) that test your urine or blood and claim to tell you your baby’s sex. However, again, there’s zero evidence to back up these tests or to prove that they actually work. Some of these tests claim accuracies of up to 99%, but if you do your research you’ll discover that there is no independent research to support their claims.

The upshot is that these at-home tests are a fun activity, but you shouldn’t base any purchasing or naming decisions on the result, or prepare yourself for the arrival of a girl or a boy that could very easily turn out to be the opposite sex to the one you thought you were having!

Getting Tattoos When Pregnant – Is it Safe?

Ringworm in Toddlers – Causes and Prevention

Eating Hot Dogs When Pregnant – Is it Safe?

Can You Reheat Breastmilk?

How Long Can Breastmilk be Kept at Room Temperature?