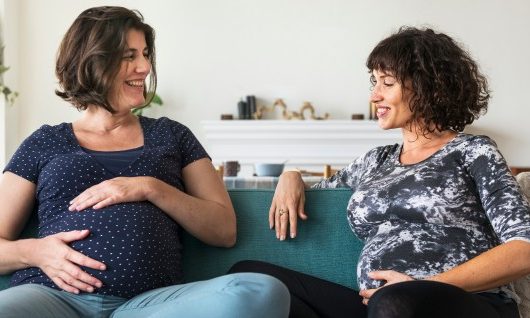 Some six million American women become pregnant each year. If you are pregnant, one of the first things you’ll likely ask yourself is: “When will I start showing?”

Bringing a baby into this world will provoke dramatic changes in your body, many of which go largely unseen: your breasts become hypersensitive, your uterus enlarges, and your hormones start to run wild. And then you’ll experience symptoms like heartburn, nausea, and fatigue—all part and parcel of the great of miracle human reproduction.

But for many pregnant women, the most profound change you go through is your appearance. All of a sudden, a pregnancy becomes real when we first notice the formation of our baby bump. So whether we’re excited to show off our hump to the world or feel apprehensive about the changes to our body, we all wait anxiously for the first signs of pregnancy to appear.

For many expecting moms, especially the first-timers, waiting for visual cues that a brand new life form is brewing in the belly can be a significant cause of stress. And comparing one’s baby bump to others at a similar stage in the journey can lead to a state of outright panic.

The truth is all women are different; no two pregnancies are the same. The time it takes you to start showing could be drastically different from your friend for a whole host of reasons.

When Can I Expect My Pregnancy to Show?

Sorry to be the bearer of bad news, but there’s no hard and fast answer to this time-old question—it depends on your physical characteristics and personal circumstances.

What past data has taught us, however, is moms-to-be typically develop a noticeable baby bump during the 12th and 16th week of pregnancy as the uterus doesn’t have time to leave the pelvis until then. The vast majority of pregnancies begin to show during the second trimester.

Nevertheless, some moms exhibit the tell-tale signs of a pregnancy by the end of the first trimester. Others, however, won’t sport a baby bump until well into the third. The spread is broad, and you could fall on either end of the spectrum, depending on several factors.

What Factors Determine When You Start Showing Signs of Pregnancy?

So what determines when your pregnancy will start showing? And can you weigh these up to paint a clear picture of what’s to come?

Ten different factors affect when you start showing, and you can take these into consideration to get a rough idea of when you might first notice that precious baby bump. But don’t rush out and buy that maternity dress just yet because not knowing when you’ll start showing is an all-too-common scenario.

Let’s examine the variable factors one-by-one to help give you an idea of what to expect.

Taller women have longer midsections, which disperses the pregnancy weight over a larger area and hides the baby bump. Or, in other words, they’ve got more space to grow into.

As a result, taller women tend to get visible signs of pregnancy later than shorter women. Shorter women, conversely, have less room in the abdominal area, which means their uterus will begin to protrude earlier.

Your weight has a profound effect on when you’ll start showing, with curvier women appearing pregnant much later on. But rather than looking specifically at your weight, Body Mass Index (BMI) is a more useful metric to follow.

Women with a BMI of 24 or below will start showing physical signs of pregnancy earlier because they have very little body fat to hide the bump.

On the other hand, women with a BMI of 24 to 29 will take longer to appear pregnant. And obese women, classified as having a BMI of 30 and above, will appear pregnant even later because they’ll have an abundance of excess body mass to hide the growing baby bump.

Ever seen those fitness fanatic moms on social media with a barely noticeable baby bump despite being well into the third trimester?

The reason for this freaky phenomenon is tightly toned and taut abdominal muscles hold a growing baby closer to the torso, which prevents the bump from protruding. Essentially, a six-pack serves to lift up an expanding uterus by providing additional muscular support.

If you haven’t spent your life clocking endless crunches at the gym, your lesser developed abdominal muscles won’t hold the uterus in place, and your belly will stick out sooner.

When the muscles finally separate, a noticeable bulge naturally appears. Diastasis recti occur more frequently in women over 35, women who have been pregnant before, and women who have given birth to large babies or multiple babies at once.

Number of Past Pregnancies

Women on their first pregnancies take longer to show.

After two or more pregnancies, however, women tend to start showing up to a month earlier than the first time around. A seasoned mom’s uterine muscles have already stretched and grown to accommodate previous pregnancies, which makes her belly far more likely to protrude earlier than a first-timer. The uterus sits further forward within the abdomen, which makes it more noticeable.

The Position of Your Uterus

Regardless of whether you’ve been pregnant before, the natural resting position of your uterus can affect when you start to show.

Want to find out whether you’re retroverted or anteverted? Ask your obstetrician to perform an ultrasound or pelvic exam.

Number of Babies in the Womb

Women who are pregnant with twins or multiples will start showing much earlier than everyone else, typically in the first trimester. And that makes a lot of sense because two (or more) babies and a vast quantity of extra fluids and placenta are present.

Twin mothers tend to start showing several months earlier than single child pregnancies, while multiples show even earlier than that.

Genetics plays a role in the time it takes for your baby bump to start showing. If your mom took a while to show, the chances are you will be too. A range of other factors also come into play, including your size, skin-tone, and genetic composition.

Ever noticed how you tend to fart and burp more frequently as your pregnancy progresses? Well, that’s because the added weight and pressure of the baby inhibits other bodily functions from performing at their peak, including digestion. And this reduced digestive capacity gives gas more time to accumulate and makes it more difficult to release.

This build-up of gasses is commonly known as bloating and will expand your baby bump as your pregnancy progresses. Different women experience bloating at different rates, so this particular factor is a little tricky to predict.

One reason your baby bump starts showing faster or slower than expected could be because your original due date was off the mark. Obstetricians commonly provide an inaccurate due date in the early stages because there are fewer tools at their disposal at this time.

But as the pregnancy progresses, ultrasounds and other techniques allow them to better predict the real due date.

Do All Baby Bumps Look the Same?

Larger women with a high proportion of weight around their midsection often develop a B-shaped baby bump rather than the standard D-shaped belly. That needn’t be a cause for concern, however, as it’s entirely natural for plus-size women to get a B-shaped stomach during pregnancy. Most of these B-shaped bellies eventually evolve into the D-shape at some point during the third trimester.

If you’re worried about the size or shape of your baby bump, check with your obstetrician during your next maternity check-up. And don’t stress yourself out comparing your pregnant body to others, especially those superhuman Instagram moms. Women all develop differently, and there’s nothing unnatural about the way you look.

Predicting When Your Pregnancy Will Start Showing

Most pregnant moms begin to show in the second trimester, typically sometime between weeks 12 and 16. However, there is a wide array of factors you can use to get a rough idea of when your baby bump might first start to show.

Just remember that everyone develops differently, and that showing earlier or later than expected doesn’t mean there’s anything wrong with your baby. Seek medical advice from your obstetrician as you normally would and enjoy the thrilling rollercoaster ride that creating a new life entails.

Getting Tattoos When Pregnant – Is it Safe?

Ringworm in Toddlers – Causes and Prevention

Eating Hot Dogs When Pregnant – Is it Safe?

Can You Reheat Breastmilk?

How Long Can Breastmilk be Kept at Room Temperature?