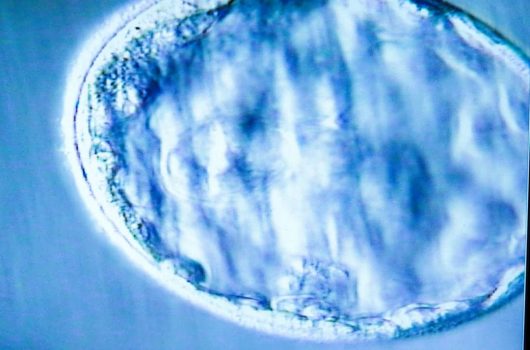 Second only to conception, implantation is among the most profound physiological changes your body will experience during pregnancy—yet many women won’t even notice it’s happened at all.

Although some women experience minor symptoms like spotting and abdominal cramps, many remain entirely unaware they’ve conceived . For the vast majority of us, we’ll have no idea we’re well on the way to making an embryo.

So when exactly does this miraculous milestone occur? How can we spot the symptoms, and when should we reach for the pregnancy test?

Let’s unravel the mysteries of implantation together in this comprehensive guide.

Ovulation and Fertilization: How Does the Menstrual Cycle Work?

To delve deep into the details, it’s vital to understand the basics of the menstrual cycle first. The menstrual cycle, which refers to a female body’s natural preparation for pregnancy, is based around ovulation, which is when the eggs get released from the ovaries. Ovulation typically occurs 14 days before the beginning of menstruation—day 14 on a 28-day cycle or day 18 of a 32-day cycle.

The egg can survive for around 24 hours after ovulation, and if it comes into contact with sperm in the fallopian tube, fertilization may occur. Sperm can survive up to a week inside the female body, which is why women can still conceive several days before or after ovulation.

After fertilization, the fertilized egg slides down the fallopian tube and burrows its way into the uterine lining.  By attaching onto the uterus, the egg can draw nutrients and oxygen from the mother, which allows it to evolve into a cluster of cells called a blastocyst, before eventually becoming a fetus.

This incredible process is known as implantation and marks the making of an embryo, which many believe to be the true beginning of a new human life.

Once the implantation phase has finished, the newly formed embryo will start producing hormones to prepare the woman for pregnancy by creating the placenta and deactivating the period. One of these hormones is called human chorionic gonadotropin, or hCG, which is what you test for using a home pregnancy kit. This handy hormone also plays a pivotal role in maintaining the uterine lining through pregnancy.

Implantation fails if the endometrial lining isn’t capable of supporting life or the blastocyst is abnormal, which causes the egg to die and excrete during the next period.

Although some proclaim conception to be the starting point of life, many in the medical community argue that implantation is the real beginning of it all. A study published in Nature Biotechnology found two-thirds of conceptions don’t result in a pregnancy, as the cells often fail to connect with the endometrium and latch themselves onto the uterine wall. Such a low success rate, the study argues, suggests that the embryos are pre-destined to survive or die before dividing the first cell.

When Does Implantation Occur?

In the majority of successful pregnancies, implantation occurs between 8 and 10 days past ovulation (DPO), with 9 DPO being the most common. Sometimes, however, implantation may occur between 6 and 12 DPO, although the chances of it happening before 8 DPO are slim. In fact, implantation occurring at 6 DPO has a likelihood of just 0.05%.

Therefore, a woman with a standard 28-day menstrual cycle—who ovulates on the 14th day—could expect implantation to occur sometime between days 22 and 24, with day 23 being the most likely. For longer cycles, implantation usually occurs between 4 and 8 days before the scheduled arrival of the new menstrual cycle.

When Did My Implantation Occur?

We’ve put together an implantation calculator to help you wrap your head around it all. Although neither of the following two methods is 100% accurate, they’ll at least give you an estimate of when your implantation may have occurred.

If you keep track of your menstrual cycle—which we highly recommend—then it’s super easy to work out your implantation date.

Of course, not all women keep close tabs on their menstrual cycles, so many of you out there have no idea when you’re ovulating. In this situation, we’ll have to do the calculation from your Last Menstrual Period (LMP) instead.

Is an Implantation Calculator Accurate?

These calculators give you a rough estimate of when your implantation may have occurred, but they’re certainly not gospel. Both are based on assumptions that won’t necessarily correspond with your reality.

Calculator one, where you know your ovulation date, is by far the more accurate of the two—another reason why keeping track of ovulation is a sensible idea. Here, the only assumption we’re making is that implantation will occur at 9 DPO; it’s easily the most common day, but this isn’t always the case.

Calculator two, where we only know our last menstrual period, is less accurate because we’re making three assumptions: every menstrual cycle is 28 days long, every woman ovulates halfway through the cycle, and all implantations occur at 9 DPO. If any of these assumptions aren’t correct in your situation, then the prediction could be wrong.

Why Should I Know My Implantation Date?

You might be questioning whether any of this matters. Why should you bother working out when an embryo attached itself onto your uterine wall?

The first is a mere matter of interest. As we know, implantation is the exact moment a new life began in your belly. It’s the start of a long and marvelous journey that will give your yet-to-be-born child a chance to experience the immense pleasures of this earth, and it feels kind of nice to know precisely when it all kicked off.

The second reason is much more tangible: the date implantation occurs dramatically influences the probability of the pregnancy being successful. Sadly, up to 20% of pregnancies fail, and 80% of those miscarriages occur during the first trimester. Late implantation can significantly increase the chances of miscarriage within these first crucial three months.

Figuring out whether you’ve had a late implantation won’t help save the embryo, but you’ll at least be able to better prepare yourself for what might come.

A study in the New England Journal of Medicine found that the effect a late implantation has on the survival rate of a fetus is profound, especially one from DPO 11 and onwards. As you can see, embryos that implant on 9 DPO are most likely to make it, and the survival rate gets progressively worse after each passing day:

Although there isn’t any proof, the researchers suggest the higher loss rate is because embryos that fail to implant quickly have some kind of impairment.

What Are the Symptoms of Implantation?

The symptoms of implantation are minor, and many women won’t experience any at all. In fact, some researchers argue that these symptoms are a myth, and are more likely the result of the high levels of progesterone that arise during the luteal phase of the menstrual cycle.

Nevertheless, the two most common symptoms reported during the implantation phase are spotting and cramping.

Implantation bleeding tends to be mild and spotty, typically arriving several days before your period should come. Around 15 to 25% of women report experiencing the phenomena, which, unlike a period, won’t flow or clot.

What Is Implantation Cramping?

The hormonal shifts associated with implantation may cause cramps in some women, which tend to be less severe than those experienced during a period. Many women report nothing more than a tingling feeling in the stomach.

When Should I Get a Pregnancy Test?

Given the symptoms of implantation are so slight—if they exist at all—it’s impossible to self-diagnose implantation from these alone. The only way to really know whether you’re pregnant is to take a test. Not all home pregnancy tests are made equal, though, so be sure to choose a reputable product.

A home pregnancy test works best during or soon after the first day you’ve missed your period, which typically occurs between 12 and 14 days after ovulation. These tests detect the presence of the hCG hormone, which won’t appear until implantation has finished.

What Is an Implantation Dip?

A women’s temperature rises about 1 degree at the moment of conception and remains at this level for the duration of the pregnancy.

Should this temperature go back down to the standard rate, this may mean the implantation didn’t succeed, and the woman is no longer pregnant. Again, however, the best way to know for sure is by taking a pregnancy test.

Implantation is the magic moment when a woman’s reproductive system creates a new life form—although the process is so minor, most won’t feel a thing. By tracking your ovulation cycle, you’ll be able to get a good indication of when implantation occurred and the probability of the fetus thriving.