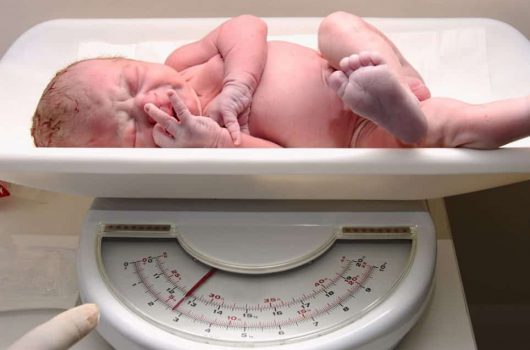 Usually, parents don’t want their babies to be average. However, when we’re considering baby weight, it’s a different story. Too low a birth weight makes parents worry that their baby may be ill or too little to remain healthy. Too high a birth weight and immediately, they begin to have concerns about obesity. Yet, moms and dads out there can take a deep breath and relax. The range of healthy birth weights is pretty wide, so in most cases, there’ll be no reason to worry when your new arrival makes an appearance, whatever he or she weighs.

One of the first questions that new parents hear from their friends and family members is how much their new arrival weighed. It’s no wonder, then, that so many moms and dads are hung up on their little one’s birth weight. The average baby weight for a newborn is around 7.5lbs for babies of Caucasian descent and slightly lower for babies of African-American, Native American or Asian descent. 80% of all full-term babies will weigh between 5lbs 11oz and 8lbs 5.75oz. That still leaves 20% of full-term babies outside of these parameters. Many perfectly healthy babies are born weighing over 8lbs 6oz and under 5lbs 11oz. However, in some cases, your doctor or midwife may want to run some tests or carry out additional monitoring to ensure your little one is healthy.

Which Factors Are Involved in Determining Your Baby’s Weight?

No two babies are the same, but which factors determine how much yours will weigh?

The Role of the Mother’s Health in Average Baby Weight

In full-term babies, genetics have a key role to play in their body weight. Maybe both their mom and dad are broad and tall, or maybe both are petite. Yet, in most cases, if a baby has a higher or lower-than-average birth weight it could be due to the mom’s health.

Newborns weighing in the tenth percentile are said to be SGA (small for gestational age). Often, this happens because the fetus hasn’t been able to get enough oxygen or nutrients for their tissues and organs to develop normally. The mom’s health is a major factor here. If the mom suffered from pregnancy-induced hypertension, for example, their baby’s weight could be reduced. Kidney or heart problems or respiratory conditions can also cause a lower than average birth weight. Drinking alcohol and smoking during pregnancy are also linked to SGA babies.

Meanwhile, babies with a birth weight in the 90th percentile are said to be LGA (large for gestational age). This may have been caused by the mom being obese or having gained excess weight during her pregnancy. In many cases, LGA babies are born to moms who suffered from gestational diabetes.

Women who have suffered from glucose intolerance or gestational diabetes may have caused elevations to occur in their little one’s blood sugar. High blood sugar levels cause the baby’s body to produce more insulin and the result is a chunkier, larger newborn. In some cases, the baby is so large that there can be problems with vaginal deliveries and a cesarian may be necessary.

Being large or small for gestational age can cause health issues for newborns when it comes to maintaining appropriate blood sugar levels. Babies who are underweight lack the necessary fat stores to stay warm and to maintain their blood sugar levels. When blood sugar levels drop too low, the consequences can be serious so such babies may need dextrose or nutritional supplements delivered via IV until they are stabilized and start to feed normally. Babies born to glucose-intolerant or diabetic mothers may generate excess insulin in the early postpartum period, and this too can cause blood sugar levels to drop, requiring medical intervention.

Your newborn may be average weight at birth but by the time you leave the birthing center or hospital, he or she may weigh around 5-10% less than their birth weight. Don’t worry though, that’s completely normal.

Why does this happen? Your baby is simply losing fluid, something that always happens following delivery. Also, babies don’t require much food in their first few days of life (which is just as well, since your breast milk won’t come in for a day or so after the birth) so those lost ounces won’t be gained back immediately. Within around 5 days, you should see your baby beginning to put on weight again. Within a couple of weeks, your little one will probably be back to their birth weight and maybe even beyond.

Your little one’s weight will be monitored regularly during your well-baby check-ups at around one, two and four weeks. However, you can take your baby to be weighed whenever you like, so if you’re worried that your newborn isn’t gaining weight at the right rate you can always get some advice. Don’t rely on your home bathroom scales though, they aren’t sufficiently sensitive to detect the tiny weight increments that your newborn will put on.

Usually, once your baby has regained their original birth weight, they’ll continue to put on between 4 and 7 ounces each week for around 4 to 6 months – a total of 1-2 lbs each month. Babies who are formula-fed will gain weight slightly more quickly after the age of 4 months since formula contains more calories compared with breast milk. Also, parents often encourage their babies to finish each bottle rather than allowing them to leave the breast whenever they like. If you’re uncertain whether your baby is drinking enough milk you can check their diapers – around 8-10 wet diapers daily and a minimum of 5 dirty ones for breast-fed babies (less for newborns on formula milk) is about right for a well-fed little one.

Around 7-10 days of age, a lot of babies experience a growth spurt. They may have another one at three weeks then another at six weeks. When your baby reaches those stages, they may demand even more feeds and their weight may increase more in those periods, increasing more slowly between their growth spurts.

My Baby Is Losing Too Much Weight

If your little one is regularly gaining a lot less than their recommended 4oz per week, you should try to work out why they aren’t putting on weight consistently and how you can remedy the problem. There are a few common issues including:

My Baby Is Getting Too Big!

Some babies have the opposite problem and pile on weight much more rapidly than the recommended 7oz per week. While the odd growth spurt is normal, your baby probably shouldn’t be gaining at that rate week after week. Some newborns, however, naturally grow more quickly than others.

If you’re exclusively breastfeeding your baby, it’s very unlikely that you will be overfeeding. In such a case, the extra gain may simply be a sign that your little one’s appetite is growing. On the other hand, if you’re formula-feeding or supplementing your baby’s diet with formula milk, you should ensure you look out for the signs that indicate your baby is full. After all, you don’t want to force a full baby to eat more than they need!

If you spot these signs, take the bottle away.

Should I Talk to a Doctor?

Many new parents have concerns about their baby’s weight gain. However, if your little one is producing enough dirty and wet diapers each day, is latching correctly onto a bottle or the breast and seems to be alert when waking up after a nap, there’s rarely any cause to worry. All babies develop at a different rate. Newborns who grow slowly are likely to catch up eventually to their peers, while those who put on weight too quickly are likely to level out eventually.

There are, however, some occasions when it’s best to speak to your doctor. These include:

If you’re worried about any aspect of your baby’s weight, you should never be afraid to talk to a doctor or your pediatrician. In most cases, your baby will be perfectly fine and their growth will stabilize eventually over time.