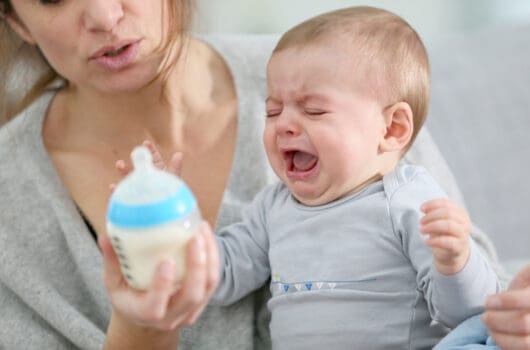 Staying fully hydrated is essential to good health, and this includes babies. Too little fluids, and your little one might get dehydrated. But how can you be sure your baby is getting enough fluids? Your baby doesn’t carry around a handy water bottle with measurements to tell you how much they’re drinking, so determining whether or not they’re drinking enough is tricky—especially if they’re sick!

Babies might not be able to tell you in words that they’re dehydrated, but thankfully there are signs and symptoms to look out for. We’ll show you what to be aware of when it comes to your little one to make sure they are hydrated and happy.

What Causes Dehydration in Babies?

The first thing to know about dehydration is what causes it. If you know the cause, you can either prevent dehydration or look for signs that your baby lacks fluids. We’ll break it down for you by age.

Causes of Dehydration in Newborns

Newborns can suffer a lack of fluids when they struggle to get enough milk. Since breast milk or formula is a baby’s only source of water, not drinking enough can lead to dehydration. In breastfed newborns, they might not get enough milk because they’re having difficulty latching on.

Difficulty latching could be due to physical problems like a cleft palate or tongue-tie, or it could be because your newborn just hasn’t gotten the hang of it yet! Breastfeeding can be tricky, especially for new moms and first babies.

Bottle-fed newborns might also struggle with sucking from the nipple initially, especially if they had physical problems at birth. Be sure to use a nipple flow made for newborns, so the milk or formula comes out slowly and doesn’t overwhelm them.

Newborns can also become dehydrated because of low breast milk supply. If the newborn has to work too hard to get the milk, it might not give them an adequate amount of fluids.

Causes of Dehydration in Infants and Toddlers

For infants and toddlers, dehydration typically happens because of an illness. Any time your little one is under the weather, you’ll want to make sure they’re getting plenty of fluids to keep dehydration at bay. Even a cold or a sore throat can make a baby not feel like drinking, but there a few illnesses that can be especially dehydrating:

Even spending time outside on a hot day can lead to dehydration, particularly for busy toddlers! They might not want to stop playing to drink some water, but you should make them anyway.

Dehydration in Babies – Signs and Symptoms

If you’re breastfeeding, it can be so hard to know exactly how much milk your baby is drinking. After all, breasts don’t come with handy measurement lines!

The best indication for whether your baby is drinking enough fluids is their number of wet diapers. Too few diapers every day is a sign that they’re not getting enough milk, but how many wet diapers you can expect does depend on their age.

Diaper output is a good first sign that your baby isn’t getting enough milk, but there are other signs and symptoms to be on the lookout for.

Note: your baby’s soft spot should have a slight inward curve when you touch it and this is normal. Noticeably sunken in, though, is a sign of dehydration.

What Are Some Home Remedies for Dehydration?

How you treat dehydration depends a lot on your baby’s age and whether it’s due to illness or something else, like a poor latch. When you’re dealing with a newborn, everything is more serious. So if your baby is younger than three months old and struggling to get enough milk or formula, you should contact your doctor right away. Still, there are a few things you can do to help.

If you suspect your baby is struggling to latch, then you’ll want to contact a lactation specialist to help you first. In the meantime, though, you can continue to offer the breast to your baby often. Skin-to-skin contact is especially helpful in getting your sleepy newborn interested in nursing.

If you have an older baby who’s vomiting and not keeping any fluids down, you should still try to breastfeed as much as possible. Be sure to keep track of each instance of breastfeeding and how long your baby nursed, so you can get an idea of if they’re drinking enough.

Just like with a baby kitten, you can dropper-feed your baby. A dropper is helpful when your baby desperately needs milk but they’re unable to breastfeed or drink from the bottle. With a newborn, it doesn’t take much to fill their little stomachs. For reference, a newborn’s stomach at one day old only holds about 5ml of milk, and even by ten days old, it only has a capacity of two fluid ounces.

For busy toddlers playing in hot weather, be sure to always carry a sippy cup of water. If they’re sick and don’t feel like drinking, make it fun with a special straw or cup. If you’re not sure when your baby can start drinking water, then be sure to see our section on water for babies below.

If you have a baby who spits up after every bottle feed, you may want to explore different formula brands. There may be one that doesn’t make your baby spit up as much.

Making your own popsicles with pureed fruit or juice is a great way to get your baby or toddler to eat their fluids instead of drinking them! If they’re suffering from a sore throat, an iced treat can be soothing as well as hydrating. You can also give them juicy fruits and veggies like watermelon, cucumber, strawberries, cantaloupe, and peaches.

If your little one is suffering from a fever, you can help bring their temperature down naturally with a soothing wet washcloth on their forehead. Be sure to only dress your baby or toddler in breathable fabric like cotton, no matter how cold it is. That’s because non-breathable fabric like polyester can trap their body heat and raise their temperature even more. With a newborn, a temperature that’s 100.4 degrees or above requires an immediate call to your pediatrician.

How Can You Prevent Dehydration?

When it comes to dehydration due to an illness, especially from diarrhea or vomiting, it’s hard to prevent it. The best you can do is treat it right away with frequent sips of water or milk. But if it’s summer or you live in a hot climate, then there are some things you should do to make sure your baby stays well hydrated.

It’s best to get in the habit of carrying plenty of drinks with you. For older babies and toddlers, this might mean sippy cups of water. If you’re breastfeeding, your baby will have access to your milk whenever they need it, but for formula-fed babies, you’ll always want to make sure you have water and formula packed in your diaper bag.

You can also feed your baby or toddler food with high water levels. These include fruits, vegetables, yogurt, dairy products (as long as they’re not lactose-intolerant), and even soups and smoothies.

Babies and sun don’t mix well. They can’t even wear sunblock until they’re six months old, so you’ll want to pretend they’re tiny little vampires and keep them well shaded. UV-blocking clothing can help, and you’ll want to dress them in light, breathable fabrics like cotton. You can bring your own shade with an umbrella.

When your toddler is playing outside on a hot day, you should get them to take a drink of water at least every twenty minutes. This will combat excess sweating and keep them cool and hydrated. Make it fun with colorful sippy cups and fun straws.

Suppose your baby or toddler refuses to drink or eat because of a sore throat or fever. In that case, you can give them acetaminophen or ibuprofen (but be sure to check with your pediatrician first) to make them more comfortable. Easing their pain and discomfort will make them more likely to drink something.

When Should You Call the Pediatrician?

Always trust your instincts when it comes to calling the pediatrician. If your mommy- or daddy-alarm bells are going off, then that’s a good indication you should call and get your little one checked out. So always contact your pediatrician with any concerns. 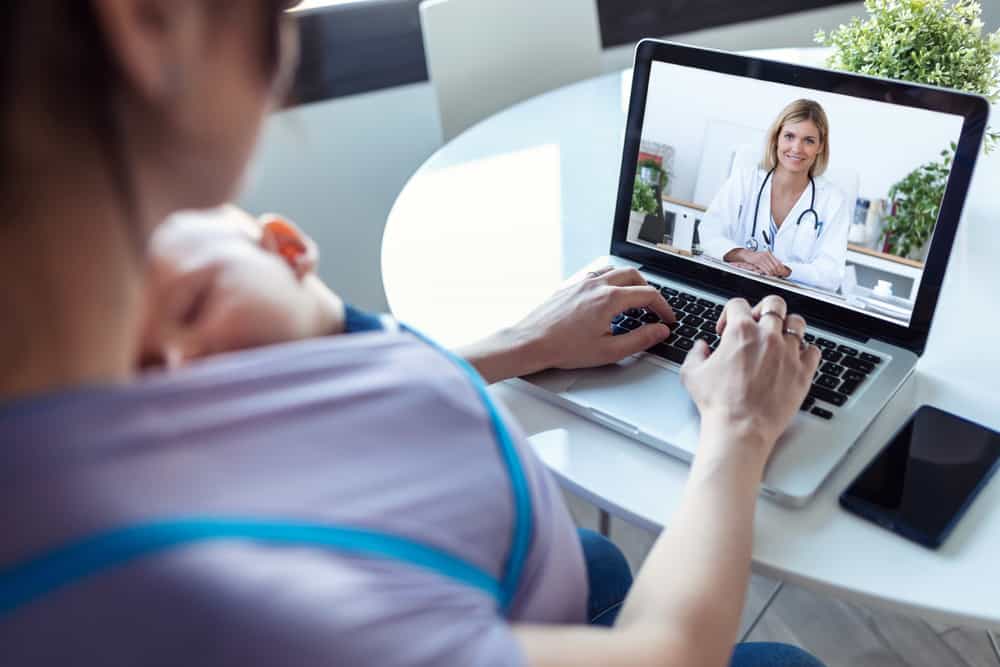 In general, though, you should definitely call the pediatrician if you see:

It’s always better to play it on the safe side, even if your baby isn’t displaying more severe signs of dehydration. This way, your pediatrician can help you get to the bottom of the cause of dehydration before it becomes a big problem.

When Should You Go to the ER for Dehydration?

No parent wants to visit the pediatric ER with their little one. When it comes to dehydration in babies, though, it can get serious fast. Here’s what to look out for.

When Should Babies Start Drinking Water?

All this talk about dehydration probably makes you think: should I be giving my baby water? Surprisingly, offering plain water in addition to breastmilk or formula in young babies isn’t a good idea.

According to the World Health Organization, breast milk is over 80% water, so giving your baby under the age of six months extra water can be harmful to their health for the following reasons.

Once your baby is six months old and older, you can give them small amounts of water (two to four ounces) along with solid foods. This is a great way to introduce a sippy cup, too! For more on giving water to your baby, check out our other article on the subject.

How Much Water Should My Baby Drink Every Day?

Of course, as your little one ages, their water requirements will change, and it’s important you’re aware of what kind of fluid intake is normal as they continue to develop.

As soon as you introduce solid foods to your baby at around four to six months old, you’ll notice that the amount of milk or formula they drink decreases, too. So, where they were once drinking around 30 to 42 ounces of milk or formula per day, it’ll reduce to 28 to 32 ounces per day. This makes sense when you think of how much water they’re getting from their pureed baby food.

Even when your baby is a little older—between the ages of six to twelve months—they won’t need a lot of extra water. They’ll get everything they need from their breast milk or formula and their solid foods. It’s still a good idea to introduce a small amount of water in a sippy cup every day, though. You want to aim for about two to four ounces of extra water per day. This way, your baby will more easily transition from the breast and bottle to a sippy cup.

Once your baby is twelve months old and heading into the toddler stage, they’ll reduce the amount of milk they drink again to around sixteen ounces per day. They’ll likely be eating three meals a day plus snacks, so their milk intake will naturally reduce.

Always check with your pediatrician if you suspect your little one might be suffering from dehydration. They’ll help you get to the root of the problem so you can make sure your baby gets to feeling better right away. In the meantime, you can try out our home remedies to hydrate your baby. And now that you know the signs and symptoms, you can act quickly to get your baby feeling better right away.